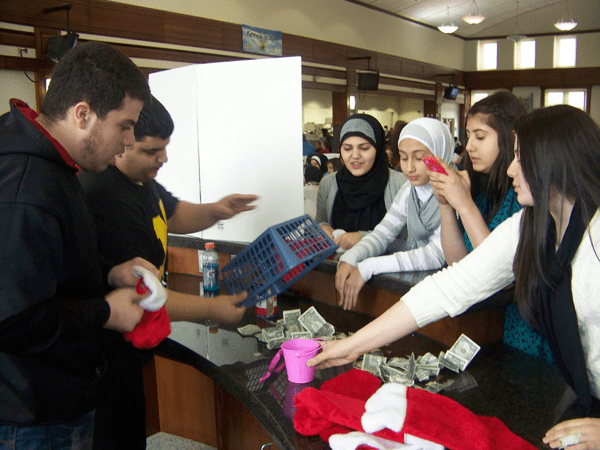 Since their deaths, communities throughout the school district have opened up their hearts and wallets to the children, Chastity, 8, Drako, 9, and Michael, 16.

The children’s grandmother, Dearborn resident Shirley Sironen, is raising them. Sironen did not return calls by press time.

Since Feb. 5, the students had about one minute during three daily lunch periods to donate as much money as possible. Hundreds of students donated about $400 – but the money kept pouring in.

On Feb. 7, students donated $75 during the first lunch period. Each lunch period lasts for 30 minutes.

During a second lunch period on Feb. 7, 10 student volunteers raced through the lunch room with buckets, Christmas stockings and other items to collect donations.

But before the collection, Snow PTA Vice President Alysia Schueler made a plea to the students.

“I’m here because I am a Snow parent and Fordson High School has stepped up,” Schueler said of the fundraiser. “If you have change, please step up. They have no parents.”

“(The first) lunch donated $75,” Bazzi said, playfully baiting the students. “Let’s see if you can match or exceed that.”

Bazzi said donating is a no-brainer.

“It is such a big deal that we support these kids,” Bazzi said. “It is so heartbreaking, especially after the holidays. It is important to do what we can.”

“It started in December when the mom was sick,” Schueler said. “I put the message on Facebook that she is dying of cervical cancer, and we got $1,000.”

More people donated when the story was picked up by local media.

“When the dad became sick we knew we had to do something again,” Schueler said.

After Ray Cannizzaro died, Schueler said she and others went out to local media groups and informed them about the children’s predicament.

“A lot of school groups reached out and started ‘Miracle Minute,’” she said.

FHS sophomore Mariam Sareini, who volunteered during the fundraiser, said she wanted to help any way she could.

“It didn’t matter if I knew them or not,” Sareini said. “If I lost my parents how would I feel? I would want somebody to help me.”

The Ford Community & Performing Arts Center will host a spaghetti dinner fundraiser from 4 to 8 p.m. March 6.

Spaghetti plates are $10 for adults and $5 for children. DPS, the city of Dearborn, Dearborn Firefighters’ Burn Drive and other service groups are organizing the dinner.