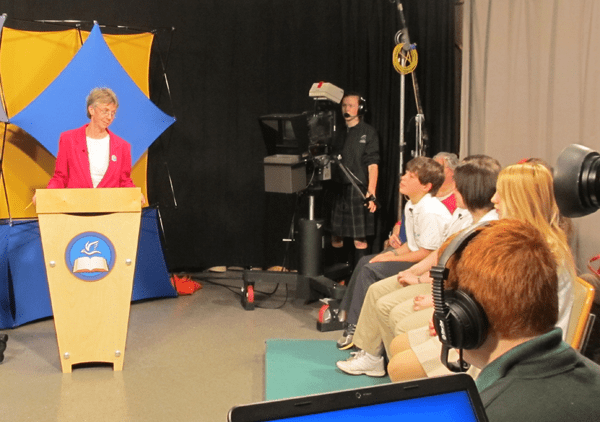 Photo by Sue Suchyta
Therese Terns (left) moderates a taping of “Bible Quiz Time” for local cable while the team from Dearborn Emmanuel Lutheran School awaits their next question.

Dearborn resident Therese Terns, volunteer host and producer of the show since its creation in the mid-1980s, said Bible Quiz Time began with a desire for local cable programming, and with equipment grants from local cable providers.

“The kids need to study the Bible… and to interact with other schools of different faiths… I think that’s really important,” Terns said. “And I think it is fun for them to do this.”

Participants from St. Michael Lutheran School in Wayne, which did not have enough eighth grade students to field a team this year, create the questions.

Over the years, the show evolved from index cards, flip charts and markers to a high tech program with computer screens and digital touch pads and pens, Terns said.

“We have certainly morphed into a high tech program,” Terns said. “The popularity has grown simply from word of mouth. The schools that are involved are seriously competitive. I totally enjoy meeting the students and seeing them in a common arena that helps them learn more about their biblical roots.”

Westland resident Al Renard of St. Michael Lutheran in Wayne, who helps formulate the questions and judge answer eligibility, said the students amaze him with how well they learn the material and the insights they gain.

During the first round of the January taping, the St. Matthew Lutheran and Dearborn Christian teams both correctly answered the final team question.

“I thought that the final question was so hard that they would not get it at all,” Renard said. “And both of them got it perfectly.”

Seventh grader Katie Wollard, 12, from Dearborn Divine Child said they learn which chapters of the Bible to study a month before each taping and their coach prints out pages for them, which lets them work together to anticipate possible questions.

“The most fun part about it is we get to be with all our friends when we do this,” Wollard said. “And I think the most challenging part is just making sure that you know everything that you have to know and trying to remember it.”

Westland resident and past coach Bonnie Renard of St. Michael Lutheran in Wayne said parents of past Bible Quiz Team members come up to her often and praise its long-term effectiveness as a biblical learning method.

“They’re playing Pictionary or something and a question comes up about something that most of the people in the room don’t know, and their child who was in Bible Quiz says, ‘I know that – it’s such and such’ – and they’re right,” she said. “So they remember it years afterwards. So it really does make a difference in learning the stories.”

A student studio crew meets a day before each monthly taping with U of M-Dearborn technical director Greg Taylor to fine-tune their technical skills and input graphics for taping day. This year seventh and eighth graders from Sacred Heart serve as graphic and audio technicians, floor director, camera operators and scorekeepers.

Second year crew member and eighth grader Omar Alami, 14, of Sacred Heart said working on the studio computer and controlling the television monitors taught him valuable skills, like how to do PowerPoint presentations and hook up microphones while giving him a better relationship with his team.

Tapings occur once a month, for five months, starting in November. Each school receives a yearly schedule with Bible chapters for each monthly quiz, dates and order of the games, and when teams serve as audience members.

U of M-Dearborn media service personnel edit each show, and give DVDs to each school and to City of Dearborn Television, WOW! and Comcast for later airing.

When teams compete, each game begins with a “Jeopardy”-like question-and-answer round, with “who,” “what,” “when,” “where,” “why” and “how” categories, and answers worth five to 25 points, plus two bonus questions. The second segment includes a quick draw challenge, where teammates guess a biblical phrase as a team member draws, while part three poses a question for each team to solve together.

Win and loss records as well as cumulative point tallies (in case of a tie) at season end determine the first, second and third place trophy-winning teams.

January’s Bible Quiz Time tested contestants on select chapters from 1 Samuel, using the New International Version of the Bible, with St. Matthew Lutheran defeating Dearborn Christian in the first round, Guardian Lutheran winning over Divine Child in the second set, and Emmanuel Lutheran earning more points than Sacred Heart in the third segment.

After their team’s win, eighth grader Hannah Coomer, 13, of Emmanuel Lutheran said being on Bible Quiz Time is fun.

“You’re on TV and that’s what really makes it fun with the competition and learning God’s word,” Coomer said.
The Emmanuel Lutheran team said they enjoy meeting students from other schools as well.

Bible Quiz Time teams involve students, parents and school staff, Terns said, and she continues with it because she believes in its worth.

“There’s so much more that comes with it; it is not just learning facts of the Bible,” Terns said.