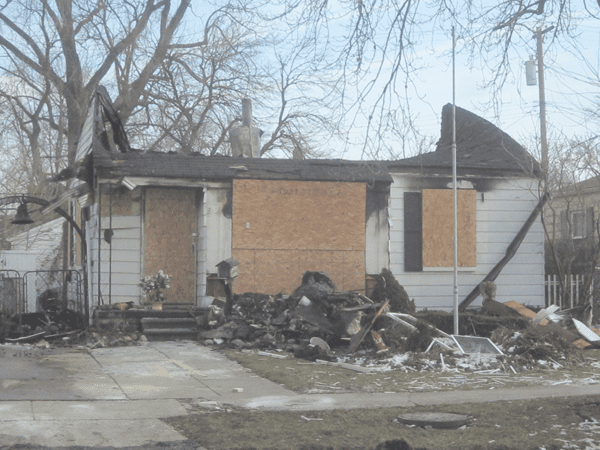 Photo by Andrea Poteet
A fire in this house on Hanna took the life of a 52-year-old man Tuesday.

By ANDREA POTEET
Sunday Times Newspapers
MELVINDALE – A 52-year-old resident died in a Tuesday morning fire in his house in the 1700 block of Hanna.

Fire Chief Steven Densmore said the department received a call about 4:30 a.m. that day about a house “explosion” in the block.

When the fire was put out after about 30 minutes, they found its resident, William Kristian, dead in the bathtub in a bathroom in the back of the house.

“He had a medical condition,” Densmore said. “The neighbors told me he was disabled but I don’t have any proof of that. We’re waiting for reports to come back from the (Wayne County) Medical Examiner’s Office.”

He said the cause and origin of the fire are still unknown pending investigation.

“That’s why it’s taking a little longer than usual,” he said. “We’re ruling out what we’d commonly think would cause an explosion.”

Melvindale firefighters were assisted by the Allen Park Fire Department. The house was a total loss.