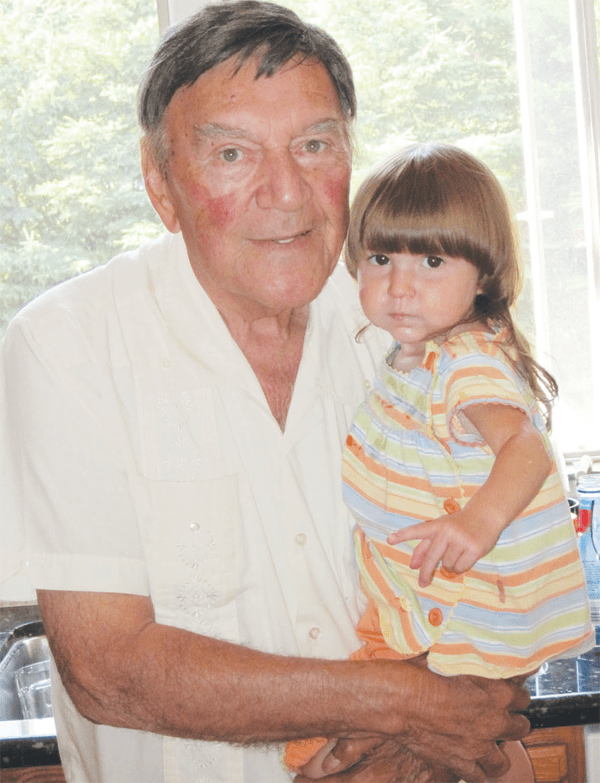 Photo courtesy of the Canfield family
Dearborn resident George Hart (left) holds his granddaughter Chloe Canfield during a 2010 visit with family in Livonia.

But singing is one skill many people will remember about the former state senator, county commissioner and Dearborn city councilman, who died Jan. 31.

“He was very outgoing,” Canfield said. “He loved the public, he loved politics. I remember growing up I helped with (his) campaigns and passed out little heart-shaped pins at Ford Field.”

Canfield said Hart died after he became sick during a New Mexico family visit, which left him in the hospital.

Hart, a lifelong Dearborn resident, also known as “The Singing Senator,” was like a father figure, Canfield said.

“He had a really good heart,” she said. “He loved his family. He was a good person.”

Hart was born in Detroit on May 13, 1924, to Armenian immigrant parents Azniv and Paul Haroutenian.

Hart was a lifelong Democrat and former state senator of the 6th District, which at the time covered Dearborn, Dearborn Heights, Inkster, Allen Park and most of Garden City.

Hart was last elected to the Senate in 1998.

Hart graduated from Fordson High School and later from Henry Ford Community College in 1949. He furthered his education by attending Wayne State University and earned a bachelor’s degree in political science in 1952.

He also served in the U.S. Army during World War II.

Hart was most known for sponsoring the Child Passenger Restraint Law, Senate Bill 333 on March 15, 2001, according to www.michiganvotes.org.

The law requires that children under 4 must be buckled in a car seat while riding in a vehicle. The bill is a part of a legislative package that includes similar Senate Bill 334, sponsored by former Sen. Glenn D. Steil. The bills took effect July 1, 2001.

Canfield said when her uncle was in the hospital on other occasions, he would tell doctors that because of the Child Passenger Restraint Law, he saved more lives than they did.

“He would joke around,” Canfield said. “He had a good sense of humor.”

O’Reilly said in the press release that he remembers Hart as a “people-oriented politician.”

“(He) loved shaking hands and working the crowd and (he) was usually in tune with his constituency,” O’Reilly said. “And while Mr. Hart’s approach to elected office made him a memorable character in the political landscape, he also believed public figures had the power to make a difference. But first he knew you had to get people’s attention. George was one of the best known people in the city of Dearborn for decades.”

Hart also received a “Legislator of the Year” award and was the recipient of the Steering Wheel Award from AAA of Michigan for his outstanding advocacy of promoting traffic safety, O’Reilly said.

“His legacy is the relationships he had with the public” O’Reilly said. “He would attend almost every Detroit Tiger home game. But instead of sitting in a seat, he would wander throughout the park engaging staff and fans alike.”

Canfield said her uncle could speak a few words in languages such as Romanian, Arabic, Slovakian and Polish, and he “enjoyed talking with people in their native language.”

“He was really good at picking up people’s dialects,” she said. “He would remember your brother and mother. He was an old-time politician. I think he really liked people and made them his business.”

Hart also made it his business to belt out songs at senior citizen centers, public venues and on YouTube.

“When he was in hospital the last couple of days, he was very flirtatious with nurses, telling them how pretty they were and (how) he was on YouTube,” Kolesar said. “When they watched him on YouTube, it made his day.”

Kolesar said her uncle “enjoyed the sunshine” and he visited her family many times.

“He loved all his nieces and nephews,” Kolesar said. “He was a good family man. He never forgot about the birthdays. We were very much a part of his life.”

Hart’s wife and Windsor, Ontario, resident Catherine O’Brien said her husband was the life of the party.

“He loved to dance,” O’Brien said. “We danced a lot, traveled a lot. We sang in the car. Every day that God sent we were together.”

Hart and O’Brien married last year and they’ve “been pals” for almost 10 years.

“We met at the restaurant and he started coming with (then-Dearborn Mayor) Orville Hubbard,” he said. “We got to know each other pretty good. He used to come here and eat every day. Whenever he needed a little help I helped him out. He called me his younger brother. He was a knowledgeable, sharp guy. He knew every corner of this city inside and out.”

Outside of family and politics, Hart was a member of Dearborn Moose, Kiwanis Club of Dearborn, Dearborn Goodfellows, Pulaski Civic Organization, Father Patrick O’Kelley Knights of Columbus, and many other civic and service groups.

During Hart’s political career, he also unsuccessfully ran for the Dearborn Board of Education, Wayne County Treasurer and Wayne County Sheriff. In his final attempt at public office, he filed as a Dearborn City Council candidate in 2009.

Hart is survived by his wife; two sisters, Rose Haroutenian and Helen Lundy; and nieces Kolesar and Canfield.

He was preceded in death by his parents, sister Mary Haroutenian and brother Aram Haroutenian.

The family requested that details of the funeral not be made public.