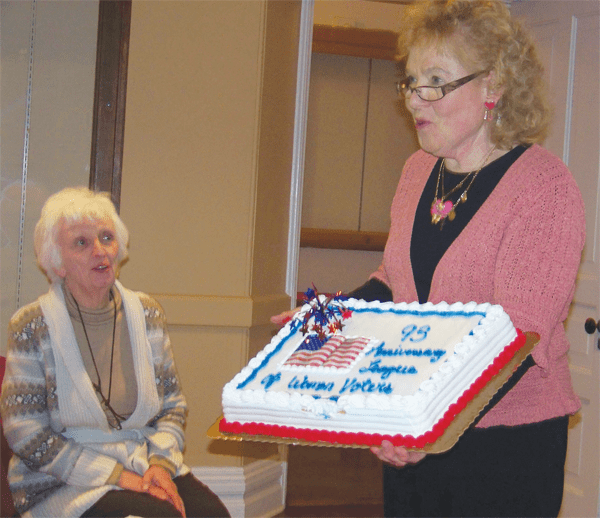 By SHERRI KOLADE
Times-Herald Newspapers
DEARBORN — It was a sweet day for a number of League of Women Voters members on Valentine’s Day, but not because love and chocolates filled the air.

To celebrate, about 20 women reviewed the history of the Equal Rights Amendment and saw two video presentations about women’s suffragists like Alice Paul and Carrie Chapman Catt at the Dearborn Historical Museum’s McFadden Ross House.

The LWV of Dearborn-Dearborn Heights, a branch of the national non-partisan political organization, was founded in 1962.

“(She was) a long-lived woman who devoted herself after the successful campaign for ratification of the 19th Amendment in 1920,” Durivage said. “She always insisted that many of the troubles of the world had their basis on the fact that women were not allowed to exert their potential political power and she reiterated this view when World War II broke out.”

Although the right of women to vote was passed by Congress on June 4, 1919, and ratified on Aug. 18, 1920, women still have a long way to go with the Equal Rights Amendment, League member Judy Carty said.

The League traces its origins to the National American Women’s Suffrage Association, created in 1890.

In 1919, Chapman Catt proposed the creation of the LWV “to finish the fight for women’s suffrage,” Carty said.

“She felt the League would bring women together in an effort for legislation, which will protect coming movements,” Carty said. “She was looking ahead.”

The NAWSA took a militant route toward suffrage, while the LWV took a more diplomatic approach, she said.

In the meantime, Paul and NAWSA members picketed the White House and were arrested.

The ERA, which provides equal rights under the law regardless of someone’s sex, was first proposed in 1923 by Paul and the National Woman’s Party.

Congress passed it decades later in 1972 and sent it to the states for ratification, where the proposed amendment needed acceptance by three quarters or 38 states. By the Congressionally imposed deadline, June 30, 1982, 35 states had voted yes.

“You can have all the laws you want, but laws can be changed and we need that protection,” she said. “It has been a long struggle, it is still going on. Well-funded anti-ERA forces got their acts together and held the last three states from ratifying it.”

Some of the original reasons against ratifying the amendment stemmed from various groups that believed the ERA would prevent husbands from supporting their wives, it would invade privacy, lead to abortion, lead to homosexual marriages, lead to women in combat, and lead to unisex bathrooms.

The longstanding ban on women in combat was ended Jan. 24, when Defense Secretary Leon Panetta signed an order that ended the direct ground combat exclusion rule for women service members.

“They said things like, ‘If you get the ERA, women will be drafted,” Carty said. “Well, now you know that is sort of a moot point.”

“When you look around, there are still unfortunate situations where people don’t break out of their mold,” she said. “It is important every now and then to refocus on it and the struggles that happen in our country.

For more information on the League go to www.lwvddh.org.