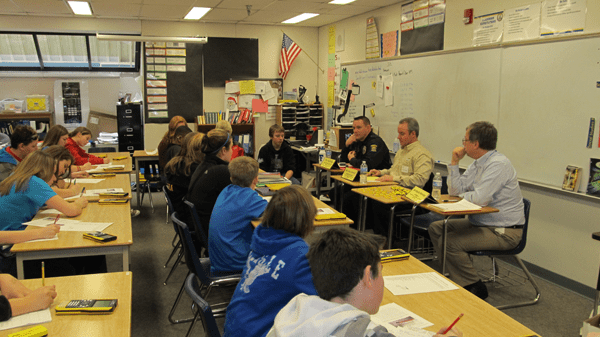 ‘Any time that I get a chance to talk to kids, I always try to tell them that there’s a lot of things that can pull you at this stage of the game that you really need to avoid.’
— Jake Davis
Trenton Police Officer

By SUE SUCHYTA
Sunday Times Newspapers
TRENTON – When police Officer Jake Davis spoke to students Feb. 8 at Arthurs Middle School career day, he said law enforcement is an unforgiving career for those not good at it.

“When it comes to a career in law enforcement you have to be honest with yourself and know that it’s really what you want to do, because there are other fields that are forgiving if you’re not very good at it,” Davis said. “If you don’t have the temperament or the… ability… then you don’t want to do it.”

Davis, a career day volunteer panelist along with insurance agent John Carnago and chemist Randy Myrabo, answered student questions ranging from why they choose their career, their biggest challenges and how much money they earn.

“Any time that I get a chance to talk to kids, I always try to tell them that there’s a lot of things that can pull you at this stage of the game that you really need to avoid,” Davis said, “not only because it’s going to mess you up for a lot of different careers, but especially a law enforcement career. The most important part is making sure you follow the rules so it doesn’t bite you – so it doesn’t come back to haunt you later on.”

Davis’ message is a powerful one for eighth graders, math and social studies teacher Leanne Kawadri said, since their last interaction with police officers was in fifth grade for the Drug Abuse Resistance Education program.

“As eighth graders… they’re being really exposed to… temptations, and people around them… are making bad choices,” Kawadri said. “I think hearing (advice) from (a police officer) directly at this point in their lives before they get to the high school level is critical.”

Students also see how different careers intertwine in a positive way, Kawadri said, noting that the insurance salesperson on her classroom’s panel explained how traffic violations affect car insurance rates, and the chemist talked about products his company makes for police officers.

This year, as students rotated through three 50-minute sessions with panelists, they learned about careers in the military, nursing, dentistry, conservation and public safety. The format of the event, now in its fifth year, encourages students to ask questions about not only the job, but the schooling, challenges and life styles associated with different occupations.

Kawadri hopes that career day, and a 10-week course in career exploration each eighth grader takes, gives students a dose of reality and a chance to examine their interests and strengths. She hopes it also helps them with high school course selection next year.

“At this point maybe they have an idea of what they want to do, but they don’t know (for sure),” Kawadri said. “We open some doors so they can focus in on what they are excited about.”

The importance of math, science, writing and speaking skills in many jobs surprises students, and helps them make a better connection with their classroom work, Kawadri added.

“They tend to make better choices in class and know that what they are doing now will affect them later on,” Kawadri said. “Even a student today just walked in and she said, ‘In both of the last groups I was in, they talked about how important math is in your everyday life and what you do in your job, and you told us that, but I thought you were just lying about it!’ So now they realize that we’re not trying to twist their arm, (and) that we really are trying to prepare them for their future.”

It surprised eighth grader Jack Palazzolo, 14, when a judge on a career panel said she needed to understand math and science to do her job.

Eighth grader Amelia Doree, 13, said the schooling and training required for different jobs surprised her. She said all the education she will need worries her, and she plans to go to college even though she does not know what she wants to do with her life yet.

Despite her concerns, Doree said career day is a positive experience for students.

“(Students) get a lot of advice about the training that they do have to go through,” Doree said. “And (they get) regular advice about staying out of trouble and how to be a good person.”

Assistant principal Deborah Waple said both the students and presenters she talked to felt this year’s career day was a success.

At the middle school level, Waple said it is hard to tell whether students are worried about getting a good-paying job in a challenging economy, because most students are still worried about the immediate concerns of their own lives.

“A lot of them… might have an idea what they want to do, and money is one issue, but… (a career) is not on their radar at this point,” Waple said. “And that’s the whole idea – that we show them a whole bunch of different jobs so that they can start thinking about it.”

Waple said she welcomes new volunteer panelists for future career days. For more information, contact her at the school, at 734-676-8700 or by email at [email protected]