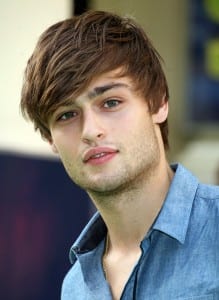 HOLLYWOOD — When Dan Stevens decided to quit “Downton Abbey,” writers were forced to kill off his character in a car crash. We knew, when he was starring on Broadway with Jessica Chastain in “The Heiress,” that he wasn’t returning for season 4. He’s already starring with Liam Neeson in “A Walk Among the Tombstones.” Have no fear, though; we’ll be seeing a lot of him in days to come.

Not long ago, we wrote about the new “Romeo and Juliet,” with Douglas Booth and Hailee Steinfeld in the title roles. It finally will be released on Oct. 25 … a long time coming. Casting began in 2011. Hailee was cast in April, Ed Westwick (“Gossip Girl’s” Chuck Bass) was cast in May as Tybalt, and Booth became Romeo in June. The film also has Paul Giamatti as Friar Laurence.

In the interim, Booth has been working non-stop. He was Miley Cyrus’ leading man in “LOL,” which cost $11 million to make and earned only $10.5 million. He’s just finished “Noah,” with Russell Crowe in the title role. Booth plays Shem, Noah’s son. Jennifer Connelly plays Naameh, Noah’s wife; Anthony Hopkins is Methuselah, Noah’s grandfather; and Emma Watson is Ila, Noah’s adopted daughter. Booth is now filming “Jupiter Ascending,” with Channing Tatum, Mila Kunis, Eddie Redmayne and Sean Bean … talk about a hot-looking cast! And here’s what they have to deal with: Humans are at the bottom of the evolutionary ladder, and a woman is targeted for assassination by the queen of the universe!

Thanks to “The Expendables 1&2”, Jean-Claude Van Damme is making a comeback … with a vengeance. He’s switching to comedy for “Welcome to the Jungle,” with Adam Brody, and then back to action for “Swelter” with “Dallas” star Josh Henderson, due out Jan 2014. Upcoming also is “Expendables 3” with the usual crew: Sylvester Stallone, Dolph Lundgren, Chuck Norris and Bruce Willis. Wesley Snipes, Jackie Chan and Nicholas Cage are in talks to come on board. Oh yes, we can’t forget Arnold. Despite his book flopping and his latest film, “The Last Stand,” tanking at the box office, he still is wanted as part of the wrecking crew. And here we were hoping he would announce his retirement and utter the phrase … “I won’t be back!”