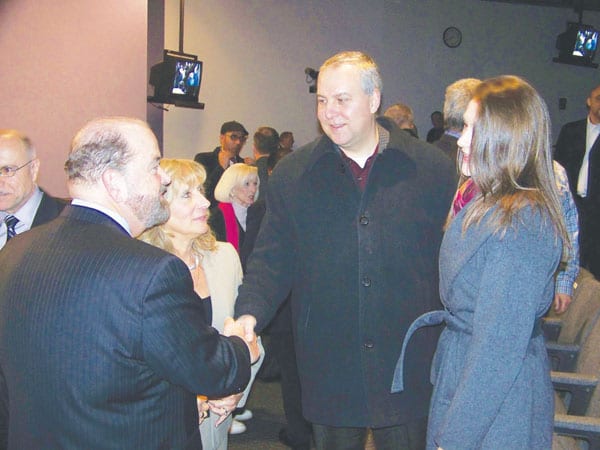 DEARBORN — Neighborhoods, business districts, education and the city’s future were several of many topics Mayor John O’Reilly Jr. discussed during his 2013 State of the City Address Feb. 27 in the City Hall Council Chambers.

In the address, O’Reilly released for the first time City Hall’s appraised value of $1.65 million.

“Our goal is to bolster our commercial areas and position them to attract customers and investment now and into the future,” O’Reilly said to a nearly packed room of county, state and city officials, community groups and residents.

On April 4, City Council approved a motion to allow the city to create a letter of intent to sell the City Hall complex to Artspace.

A month later, the city purchased the former Automatic Data Process building, 16901 Michigan Ave., one of the many steps O’Reilly has supported in moving City Hall and letting another entity fix its structural problems such as deteriorated parking and rooftop decks and costing approximately $5.7 million in repairs.

O’Reilly said in his address that other mayors have seen a need to move City Hall into a more efficient building to reduce overhead costs.

“We’re now able to achieve that goal by purchasing a 13-year-old office building at an incredibly attractive price, that is connected to our existing library, police and courts, and (Ford Community & Performing Arts Center),” he said of the 85,700-square-foot ADP building, which the city purchased in May for about $3.5 million.

The projected long-term savings is at least $250,000 in annual operating costs.

Other topics in O’Reilly’s address included the importance of neighborhood stabilization by “rehabbing” and “reselling” houses to eligible first-time buyers.

Since 2008, through the Neighborhood Stabilization Program, the city has purchased 184 vacant properties and turned them into housing and green space.

Those changes will make houses more desirable to live in, O’Reilly said.

“All of these efforts enhance our neighborhoods

today, while making them increasingly marketable for the future,” he said.

O’Reilly added that active neighborhood associations maintain Dearborn’s image and reputation for being a “clean and safe city.”

“They also foster Dearborn’s strong sense of community (by) adding value to our quality of life, by making an important difference,” he said.

In addition to clean and desirable neighborhoods, a safe city is important as well, O’Reilly said.

“Today, information about crime is more readily available, and knowledge can be a powerful tool to help keep you safer,” he said. “We keep sending this very important message: ‘If you commit a crime in Dearborn, you will be caught and prosecuted.’”

The Dearborn Fire Department also has made changes with improved public safety and emergency care, shared resources and updated

“These efforts have resulted in more lives being saved, and better recovery rates for victims of heart attacks and strokes,” O’Reilly said. “We’re going to keep our higher standards of service across all our departments, even as we progress with operational changes to increase our efficiency and reduce our costs.”

This past year, city officials have discussed a shared services agreement with the Melvindale Fire Department.

Sharing services also means cutting costs and overhead, which the city has done by eliminating almost 40 percent of the non-public safety workforce since 2001, O’Reilly said.

By working together with city unions, the city is approaching its target of reducing overall personnel costs by 10 percent, he said.

“Employees now contribute significantly more to their health care and retirement costs,” O’Reilly said. “This reduces the amount of your tax dollars needed to fund these obligations.”

O’Reilly then described how the city’s Plan Department merged with the Legal Department, among similar municipal

O’Reilly said even more technological advances are on the way, as the city plans to increase its usage of social media across multiple departments.

Near the end of the address, O’Reilly said Dearborn’s education sector is important to the city’s economy.

“As we look toward diversifying our economy even more, an educated workforce is crucial,” he said.

O’Reilly described new endeavors at colleges, such as new student housing at the University of Michigan-Dearborn, slated to open this fall, and a new Henry Ford Community College Science Building, which opened last year. O’Reilly also announced that in October, HFCC received a $15 million federal grant to lead

O’Reilly then discussed how a federally funded Intermodal Passenger Rail Station is slated to open in early 2014.

Amtrak will operate the seven-acre 16,000-square-foot station, being built on Michigan Avenue between Southfield and Brady. The station will serve the transportation needs and interests of commuters, passengers and tourists.

The existing service on Amtrak’s Wolverine Line from Pontiac to Detroit will be transformed to a high-speed service between Detroit and Chicago, according to a city of Dearborn press release. The proposed commuter rail line will run between Ann Arbor and Detroit.

O’Reilly ended his address by narrowing his focus on future goals for the city and its residents.

“I know our challenges,” he said, “but more importantly, I know the resolve we share to create a bright future for ourselves and for generations to come. Because together, as a community, as one community, we won’t set-

tle for anything less.”

“It is very important because (the restaurant) has been here for 30 years and I am happy to stay another 30,” Bojovic, 56, said.

Bojovic also said that he wants City Hall to move into the former ADP building and Artspace to move in.

“I’m hoping (Artspace) is going to improve our business and not just for myself, but for the whole of east Dearborn,” Bojovic said.

After O’Reilly’s address, he said the most important point was that residents should have faith that city officials are “trying to ensure (Dearborn’s) ongoing success.”

“We are looking 20 years out and more,” he said. “We are trying to make those decisions to ensure that Dearborn will be an attractive, desirable place to be and invest into the next millennium.”

O’Reilly also said he has an “aggressive agenda” on tap, which includes more communication with residents regarding city government.