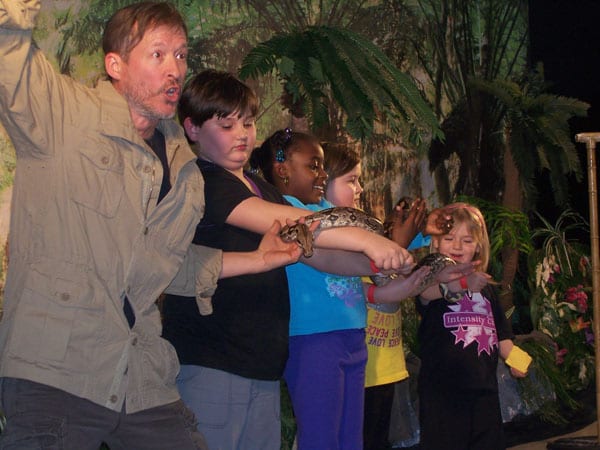 The Rain Forest host Michael Kohlrieser (left) holds the head of a red-tailed boa constrictor as volunteers Tarik Kaliman (second from left), Taylor Lewis, Carly Tacket and Brooklyn Knowles hold up the rest of the snake during the show Feb. 26.

Students, parents and teachers saw a number of animals, including parrots, a red-tailed boa constrictor, alligators, a lemur and a wild cat during the show, “The Rain Forest” show in the school’s gymnasium, 4650 Croissant St.

Host Michael Kohlrieser, the founder and director of non-profit organization Understanding Wildlife Inc., gave the audience a show with a straightforward message: save and protect the rainforest and its inhabitants.

“We travel all over the United States with these (animals) because we believe if people see how beautiful (and) intelligent they are, people would be more willing, more compelled to do things to help them out in the wild,” said Kohlrieser, who has performed the show for 21 years.

Tropical rain forests, found around the equator in places such as Brazil, Zaire and Indonesia, have been affected by things like deforestation, farming and slash-and-burn agriculture, when people destroy vegetation for space to grow crops.

Kohlrieser said a lot of beautiful animals are still on the Earth, but they may not be if people continue to destroy the tropical rain forests.

“Some of these guys are endangered of becoming extinct like the dinosaurs,” he said. “If we are going to help them, now is the time. We’ve got to get busy and do it.”

Kohlrieser mixed his message with entertainment as several hundred attendees watched him have conversations with parrots, kiss a bird, hold a large alligator and hug and play with other animals during his roughly 75-minute show.

During one of the acts, Kohlrieser had several students hold out their arms and let a slithering, red- tailed boa constrictor sit on their outstretched limbs, while many in the crowd screamed and giggled.

Kohlrieser said the boa constrictor, a non-venomous snake reaching between 8 and 10 feet long, is one of the many snakes found in tropical rain forests.

“Probably one of the biggest misconceptions in the world is that snakes are slimy,” he said. “But they are very soft, very dry, not slimy at all.”

Kohlrieser said snakes have a lot of “neat” characteristics.

“They have two eyes, but they cannot see things very well,” he said. “They have no ears (but) what they can do is smell. They have several nostrils across the front of the head and a couple of those are heat sensors. They eat warm-blooded animals and in the wild (their heat sensors) will help them find their dinner.”

First-grader Sienna Pierson said seeing the boa constrictor was her favorite part of the show.

“I liked the snake the best because it is cool,” Pierson said. “I’m not scared of snakes.”

Another part of the show included Kohlrieser showing the crowd a pair of kinkajous, also known as honey bears.

“Kinkajous live way up in the trees in the tropical rain forest and they are nocturnal creatures,” he said as they wrapped their tails around his arms. “Kinkajous are not monkeys, they are not related to the primates, but they are sometimes mistaken for a monkey.”

Kohlrieser said the kinkajous are not strong or powerful fighters, but they have an interesting trait.

“They can run in reverse just as quickly as they can run forward,” he said. “This gives them an advantage.”

Many of the children shouted in surprise when Kohlrieser brought out two macaws named Peewee and Trouble.

He described the colorful duo as “wonderful icons for the tropical rain forest.”

Kohlrieser told the audience that birds do not communicate using language like humans do, but they are trained to respond to body language signals.

“It doesn’t matter what I say, (the bird) will respond to the signal,” he said after a parrot squawked rote words to him like “hello.”

Taylor resident Barbara Kiser took her niece to the show because she thought it was educational and fun.

“I like that it is informative and they have the animals and they are interacting with the audience a lot,” Kiser said. “(My niece) is always watching (animal-themed television shows) and to meet the animals in person is the best..”

Fourth-grader Leila Kolezar said she enjoyed watching the show with her aunt, but next time she would like to see an animal who lives outside of the tropical rain forest.

“I learned things, but next time I would like to see baby kangaroos,” she said.

“It was an amazing program and it brings awareness,” Bartolotta said. “The kids are talking about the rainforest and we had a big turnout. It is a fun show that is educational, but the kids don’t really realize they are learning.”

Bartolotta said because of winter weather she was unsure whether people would show up, but she was pleasantly surprised.

Kohlrieser said he enjoys when the children walk away more informed.

“It’s almost magical when you see the expressions of the children as they drink in this information,” he said. “There are times it seems the parents transform into children and are seeing and hearing this for the first time.”

Non-profit organization Understanding Wildlife Inc., and its team are based in Wapakoneta, Ohio, and annually perform between 400 and 600 shows in the United States.

For more information, go to www.understandingwildlife.org.