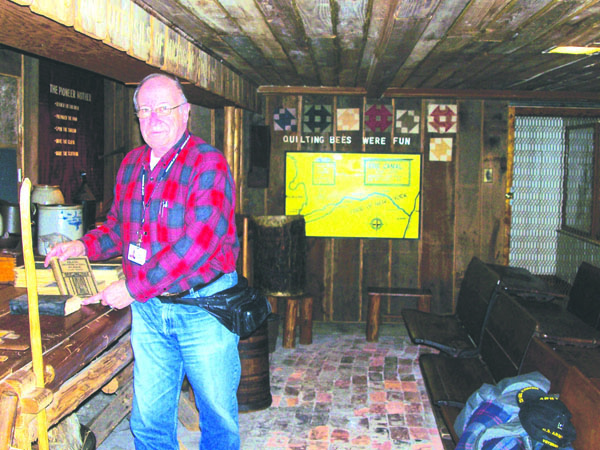 Tate and DPS Associate Superintendent Jill Chochol are collaborating for the museum’s annual Then and Now School Program running from March 26 to May.

Volunteers will give second grade students a tour of the museum campus to teach them how people lived in the early 19th century, Tate said.

“I think this is a fantastic program for the people who participate, as well as for the children,” he said. “I enjoy the children very much because a lot of them ask very interesting and intriguing questions about life back in the early days in Dearborn.”

Students will learn how families lived in the Gardner House, the oldest existing house originally built in Dearborn Township in 1830.

Henry Ford was a distant relative of the original owners, Richard and Elizabeth Gardner.

Tate said as a child, Ford played at their house, which stood on an 80-acre parcel of property in the Scotch Settlement section of old Dearborn Township near what today is the area of Warren Avenue and Southfield Freeway.

Tate said Ford later purchased the Gardner House to add to the collection of historic homes in Greenfield Village.

In 1996, the house was moved from Greenfield Village to the Dearborn Historical Museum campus.

In the McFadden-Ross House, students will learn how families gardened, farmed and made butter and how pioneer students were taught.

Tate said the volunteers are not the only ones with insight into the area’s history.

“The parents especially come up with some wonderful questions and insight into their own childhood that the kids hear,” he said. “I think they learn a lot.”

Chochol said the field trip has been in existence for more than 10 years.

“Children need experience in authentic places with activities that tell them a little more about their life and history,” Chochol said. “They learn about a lot by doing and seeing and the tour accomplishes that. The museum staff is always supportive, helpful and knowledgable.”

Although Tate said he is eager to start showing students how people in the 19th century churned butter, hauled water and maintained their houses, he needs more volunteers to help out.

Tate said as of Friday, 19 volunteers had signed up for the museum tour and he is looking for 24 volunteers or more.

“I’ll take them right up to the end,” he said. “I would like them signed up (at least a) week before so I can have (orientation).”

About 50 students visit the museum per trip.

Chochol said the most beneficial aspect of the trip is that students’ minds grow.

“Students learn a little bit about the city they are growing up in and connect it with real life,” Chochol said. “(They) understand their place in the world, which, of course, for little people is hard to do.”

Tate said students outside of the district have taken tours in the past and the program is changed based on the audience.

“We’ve had to revamp the program to make it a little more animated for the attention span of second-graders,” Tate said. “We’ve been doing pretty good on that.”