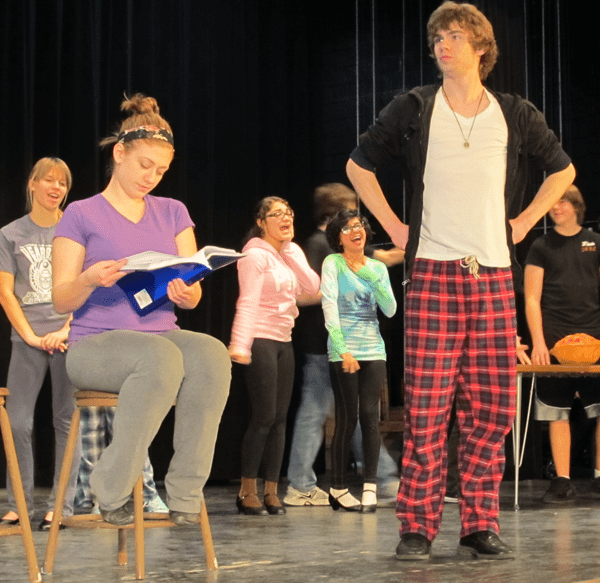 Photo by Sue Suchyta
Despite the swooning of the village girls, Belle, played by senior Katie Polidori (left), 17, remains unimpressed by Gaston, played by senior Kyle Tillman (right), 18. Dearborn High School presents “Beauty and the Beast” at 7 p.m. March 21 to 23, with a 3 p.m. Sunday, March 24 matinee.

By SUE SUCHYTA
Are you ready for a respite from the cold, harsh reality of winter and the economy? Local theaters are ready to help you recapture the magic of happily-ever-after with favorite fairytales for children and adults on nearby stages.

The Downriver Actors Guild launched a two-weekend run of a steam-punk version of Sondheim and Lapine’s musical “Into the Woods” Friday at Out-of-the-Box Theater in Wyandotte.

A musical version of “Beauty and the Beast,” another Disney favorite, completes the triad with a four-day run March 21 to 24 at Dearborn High School.

‘BEAUTY AND THE BEAST’ AT DEARBORN HIGH SCHOOL
Dearborn High School’s spring musical features the Disney musical, “Beauty and the Beast” at 7 p.m. March 21 to 23, and 3 p.m. March 24.

Tickets are $8 for children, students and seniors, $10 for college students and $12 for general admission. Call the DHS box office at 313-827-1647 for more information.

Other featured cast members include seniors Westley Montgomery as the Prince and the Beast, Kyle Tillman as Gaston, Charles Posigian as Maurice (Belle’s father), Connor Blankenship as Lumiere and Lindsay Culp as Mrs. Potts.

Director Greg Viscomi said it was time to do something different with the musical theater program.

He said the show is the movie version brought to the stage with more music, singing and dancing.

“It’s much more entertaining than the movie,” Viscomi said. “And it’s happening live in front of you. Live theater is always more exciting – it’s better than 3D – it’s there.”

The group is renting the fantasy character object costumes, which Viscomi said look like they came right out of the film.

Montgomery said the show offers something for all people of all ages.

“Kids love Disney… (and) ‘Beauty and the Beast,’” Montgomery said. “It’s a great story of love and redemption, and the Beast as a character is so complex and dark.”

At the end of Act I the Beast has a big song, “If I Can’t Love Her,” which Montgomery said is almost like an aria, and has a wide range that showcases his voice.

He said the stage play has many more songs and new dialogue not found in the movie, and many characters are more fully developed.

Blankenship said the play also provides more of the back-story than the movie, explaining what will happen to the enchanted objects and what is happening to the characters while the rose is wilting.

“Seeing it onstage is definitely more powerful,” Blankenship said. “With all the different lights and things it kind of seems like it’s more all around you.”

He said his character provides much of the comic relief.

Culp said her favorite numbers are “Human Again” and “Beauty and the Beast.”

She said the show’s family orientation appeals to audiences.

“It’s super for little kids, but there’s also some humor in it that adults will get,” Culp said. “I think it’s one of the most fun shows we have done in a while.”

Katie Polidori said it is fun seeing characters she grew up seeing in the movie come to life on the stage, including her own character.

Pizzimenti also played Belle before, in in a youth theater junior version.

The play explores the characters and story in more depth than the movie, Pizzimenti said.

“(Belle) had first-hand knowledge about being judged by the people in her town that thought she was really odd,” Pizzimenti said. “So I think that she really brings that to life – she can connect with kids that feel like outcasts and show them that there’s something a lot more beautiful inside.”

Polidori added that the story is about standing up for what you believe in as well as not judging what is on the outside.

STEAMPUNK ‘INTO THE WOODS’ AT OUT-OF-THE-BOX
The Downriver Actors Guild presents a steampunk version of Sondheim and Lapine’s musical “Into the Woods” for one more weekend, with 7:30 p.m. Friday and Saturday shows and a 3 p.m. Sunday matinee at Out-of-the-Box Theatre, 1165 Ford Ave. in Wyandotte.

Tickets are $15 for adults and $12 for students. Tickets are available at the door, by calling 313-303-5269 or online at www.downriveractorsguild.com.

A child-friendly performance at 2 p.m. Saturday ends after Act I, followed by a talkback session with cast members. Tickets are $8 for this performance.

Publicist Nancy Delgado described the steampunk theme as a Victorian era blend of science fiction with the period’s fascination for the mechanisms of steam engines, clocks and early aviation. Victorian costumes, creativity and an optimistic view of the future set the tone as well.

In this fractured fairytale, familiar characters travel into the woods in Act I to find their happily-ever-after: an ambivalent Cinderella, a playboy Prince Charming, a misunderstood witch and Jack with a beanstalk and a giant. Red Riding Hood, the wolf, her granny, a baker and his wife face challenges as well.

In Act II the characters discover the consequences of living happily-ever-after and learn that life is not as simple as it appears. Charming princes may not be sincere or loyal, dead giants are a disposal nightmare — and live ones may be merely misunderstood — and sometimes one should stop and decide whether what they wish for is in their best interests.

The March 16 performance will be shadow-interpreted for the deaf by Terp Theatre.

Tickets are $15 for all-age “ocean seating” — first four rows plus theater tour and souvenir — $12 for adults and $10 for students and seniors. The theater opens one hour prior to show time for ticket purchase, or order tickets in advance by calling 734-771-7945 or going online at www.dypac.com.

Directed by Mary Zaleski and choreographed by Holly Eggleston and Molly Zaleski, the show features the musical direction of Sarah Leonard.

The show is appropriate for family audiences, and follows Ariel the mermaid as she longs to leave her ocean home to explore the world above the sea. Along the way she must deal with her father, the evil sea witch Ursula and prove to human Prince Eric that she is the singer whose voice entranced him.

The show features the songs “She’s in Love” and “Part of your World.” 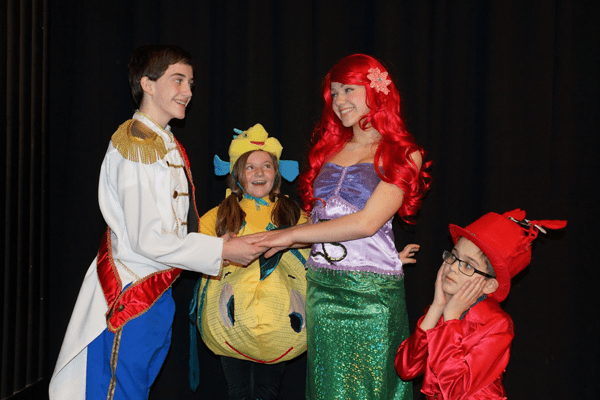