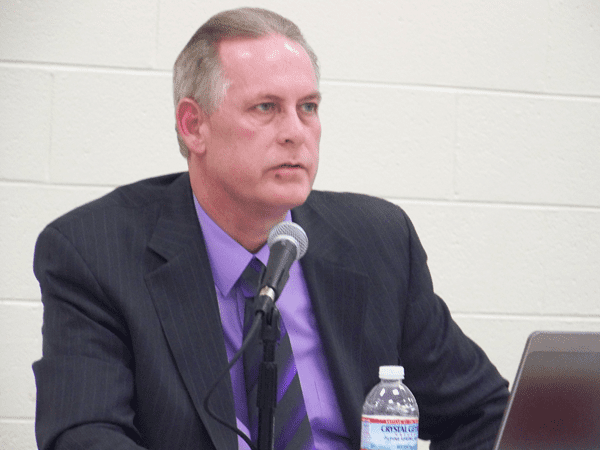 By SHERRI KOLADE
Times-Herald Newspapers
HEIGHTS — District 7 officials may soon vote to close an elementary school by the fall after a committee recommended the option to reduce the district’s $1.4 million deficit.

The district’s Elementary Building Reconfiguration Committee, formed in October, recommended closing Madison Elementary School, 4950 Madison St., to the Board of Education during a school board meeting March 4 at O.W. Best Middle School.

The deficit elimination plan has been in place since October.

The recommendation is based on a school board vote, scheduled tentatively for March 18, which would leave the district with three elementary schools — Bedford, Polk and Pardee — for its roughly 1,200 students.

Supt. Jeffrey Bartold presented the reconfiguration plan to board members during the school board meeting.

Bartold said on March 5 that closing Madison is a necessary option to keep the district afloat.

An informational meeting to discuss the plan in-depth with community members was scheduled for March 12.

Future reconfiguration plans include determining which schools will house Madison students and staff members, if the school is closed.

If Madison closes, between 15 and 20 teachers may be laid off, saving the district about $725,000. Remaining teachers will be transferred to other schools in the district.

Madison kindergarten teacher Kerri Sanders said she has accepted that her school may close after the March 4 board meeting.

“We’ve already swallowed that and it is time to move forward and do what is best for the kids,” Sanders said. “Everyone has to be on the same team.”

Sanders said even though the prospect of closing Madison is sad, the district and community members have to work together for the students.

“It is very sad because our staff is very close,” she said. “(We are) a family.”

Sanders said she plans to teach within the district if the board votes to close Madison.

Bartold said with the district’s current kindergarten through fifth-grade structure, administrators’ concentration is spread thin, but if fewer grades are housed together, students will benefit more.

“It is a better way to share resources since they will be in all the same buildings,” he said of the reconfiguration plan. “If teachers are all in same building with the same administration, they can be on the same page. It is better when they are all together.”

“The emergency manager does what he wants,” Bartold said. “He could tell employees to take health cuts, and that is a possibility if we don’t do anything. We are saying, ‘We don’t want that to ever happen.’”

Bartold attributes low enrollment numbers to a low birth rate in Michigan, among other factors such as a higher number of families moving out of the city, along with more charter schools and students in a Schools of Choice program options.

SOC provisions of the State School Aid Act gives local school districts the option to enroll non-resident students and count them in its respective districts. Bartold said although about half of the district’s students are SOC, many other students attend schools outside of the district.

Bartold said the Elementary Building Reconfiguration Committee recommended closing Madison because it is the smallest elementary school; other elementary schools had recent renovations and they could comfortably house Madison students.

The reconfiguration committee is comprised of a number of school board members, teachers, principals, secretaries and community members.

“The consensus of the committee is that this arrangement will allow us to offer more opportunities for our students to grow and learn, and to really make every dollar count,” Fujita said. “Whatever happens (happens). Change is always scary, but I know this district can work together to do what’s best for our kids.”

Bartold said reconfiguring classes will be an adjustment if Madison is closed.

“Mainly changing of the grades are what people are not used,” he said.

Velma Truitt, who has lived in Dearborn Heights for 42 years and whose grandchildren now attend D7 schools, said she does not want to see a school close, but the district has to make “aggressive” changes.

For more information about the reconfiguration plan go to www.district7.net/redesign.