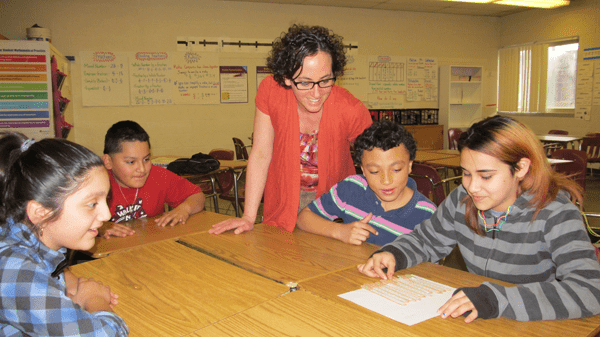 By SUE SUCHYTA
Times-Herald Newspapers
MELVINDALE – Fractions can be less frightening when students associate them with familiar activities, staff at Strong Middle School are finding.

Teachers show students hands-on ways to learn the basics, like fractions and percentages, in practical everyday ways that have meaning to students: saving money when shopping or doubling a delicious dessert recipe popular with their peers.

From a practical viewpoint, enrichment classes combat low standardized test scores in areas like fractions and geometry by remediating student weaknesses, and they prepare students for more advanced math classes like Algebra 2 now required by the state.

Currently some sixth and seventh-graders get a second math class during the school day, Strong Middle School Principal Kimberly Soranno said, and next school year all sixth-graders will get a second hour of math enrichment every school day focusing on fractions and geometry, which will support algebra classes as well.

All classrooms at Strong now have interactive whiteboards that project computer screen images onto a large screen for all students to see, Soranno said. Using them helps math teachers explain the visual concepts of fractions and geometry to students.

She encourages parents to show children how they use fractions in their life.

“You know, I said this as a kid: ‘When am I ever going to use this?’” Soranno said. “They need to see that they use math every day, that it’s part of everything they do. Whether they want to be an engineer or… a teacher or if they want to stay home with their children, they’re going to have to cook for their families, they’re going to have to have a budget… if you’re going shopping and something’s on sale, you want to know (what you save).”

Soranno added that educators are facing similar challenges throughout Michigan because the state has raised standards and is requiring students to take Algebra 2 and higher math classes, so educators are working to remediate deficiencies that students may bring with them from the elementary school level.

Testing fraction knowledge is more than just seeing if students can add and subtract fractions — they need to know how to use them in a story problem, chart or graph, Strong Middle School seventh and eighth-grade math teacher Francesca Creutz said. She said she tries to ensue students learn these skills in her enrichment math classroom.

She said pattern blocks, which combine to make a unit shape, help visual learners and makes fraction learning more fun.
“Even adults, as soon as you say ‘fractions’ they just kind of get bored or think that they’re not going to understand it,” Creutz said. “But you can easily put pieces together and see the whole, so I think it helps the visual learners.”

Relating lessons back to real life is also important, Creutz said. She gives students an imaginary $1 million windfall, and has them allocate money for their education, a car, a house and other expenses while balancing their imaginary bank account.

Creutz also brought a recipe that served four people to her classroom, and had students figure out how to convert it to serve all 32 students in the classroom. They actually made the cookies afterward, with attention to serving size, which captured her students’ attention as well, she said.

Measuring ingredients showed the importance of converting fractions to their proper form, she said, since a fraction like “10/8” does not exist on a measuring cup.

Sixth-grader Kristiani Rendon, 12, of Melvindale said she used her fraction skills recently to double a brownie recipe at home, which she said turned out well.

Knowing how to calculate how much he can save when buying batteries on sale for his hand-held electronic gaming device appeals to sixth-grader Travis Moses, 11, of Detroit.

Seeing where fractions fall on a wall-mounted number line, and pairing with another classmate for peer feedback appeals to sixth-grader Yazmin Perez, 12, of Melvindale.

Perez said she likes to bake cupcakes, which are popular with others, and knowing how to double her recipe accurately using fractions helps her maintain her culinary reputation.

Melvindale sixth-grader Omar Sandoval, 11, plans to use fractions to compare sale prices on shirts and shorts on his wish list.

Seventh-grader Mia Lindlbauer, 12, of Melvindale learned to double a “perfectly chocolate” chocolate cake recipe using fractions to make two cakes – instead of her usual one – so she would have enough pieces to share.

Lindlbauer also likes to make designs from fraction pattern blocks, since she prefers learning by seeing something rather than just hearing an explanation.

The cakes, cupcakes and cookies Vanessa Manzo makes are popular with her classmates as well, especially the cakes she decorates with creative designs, and she is glad that she has learned to increase recipes accurately using fractions.

“Not knowing what half the ingredient would be would be like guessing on it, and then it would turn out bad,” said Manzo.

Since many of her sixth-grade students are kinesthetic learners, who best learn by physically doing an activity, enrichment math teacher Cathy Melody of Brownstown Township uses a hands-on approach to teach fractions, decimals and percentages in tandem, starting with the basic concepts then moving to practical applications of the skills.

She said sometimes students think one-quarter is bigger than one-half, since the denominator is larger, so when they use fraction strips (pieces of paper divided in fourths, thirds and halves), and compare sizes they actually see than one-quarter is smaller than a one-half fraction strip.