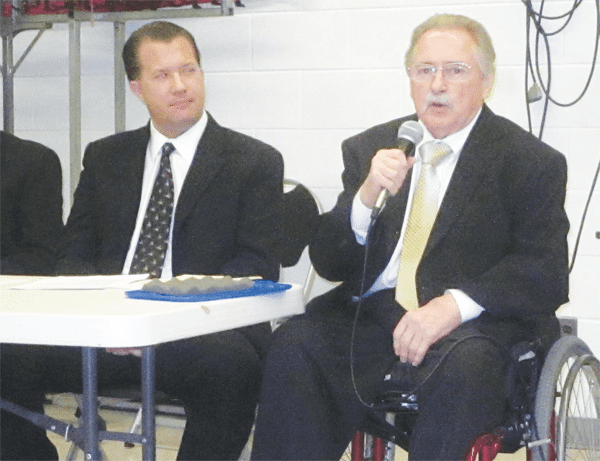 Candidates forum
Photo by Andrea Poteet
Incumbent City Clerk William Griggs (right) addresses the crowd during a March 6 candidate forum at the Copeland Center. He is one of three candidates running unopposed for the May 7 election.

By ANDREA POTEET
Sunday Times Newspapers
WYANDOTTE — Three candidates are running unopposed for their seats in the may election, but that doesn’t mean they’re taking a hands-off approach to their campaigns.

Peterson said in his almost four years as mayor and four preceding that as a council member, he has earned $23,000, $13,000 of which he has given away in scholarships to Wyandotte high school students to help preserve the future of the community.

“It’s about the future,” he said, “and I have met the challenges of the future.”

During his tenure as mayor, he said he has helped place $150,000 back on the tax rolls through the Neighborhood Stabilization Program, which revamps vacant houses into affordable housing, and developed the city’s first five-year strategic plan. In its third year, it is more than 30 percent completed.

Browning said he also does not consider his candidacy “unopposed.”

“I don’t look at this as running unopposed and being a shoe-in,” he said. “I want to be your next treasurer and I want to serve Wyandotte.”

When seated, Browning, who teaches at Henry Ford Community College, said he hopes to continue to reduce costs and increase revenue in the department by allowing a choice of payments by credit card and billing and payments online.

With his full course load, he said he will not be able to be in the office as much as he would like, but hopes to staff the office with volunteers, especially senior citizens, to keep it accessible to the residents at no cost.

Griggs has a bachelor’s degree in business and a master’s in recreation from Wayne State University. He said he hopes to continue his service as the “secretary to the mayor and council,” during their weekly council meetings.

He said he and other department heads will continue to work to reduce costs in the face of an economic downturn that significantly reduced taxable values on houses, and in turn general fund dollars.