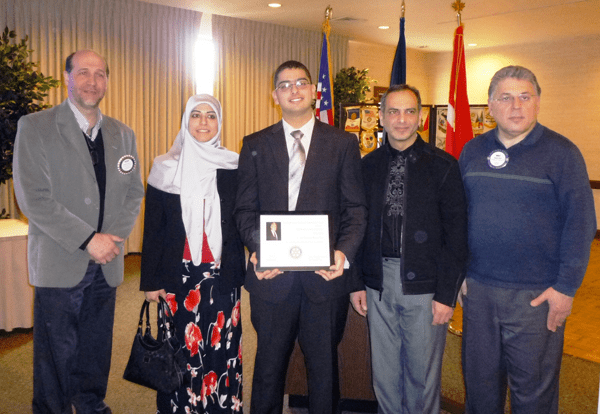 The scholarship is awarded to a high school senior attending a public or private high school in the Dearborn Public Schools boundaries. Criteria for winning the Archer Scholarship include application of the Rotary 4-Way Test — a guideline for decisions, academic achievement, leadership in class and extra-curricular activities, community service, plus honors and awards.

Archer, a longtime Rotarian and Dearborn resident who passed away in 2005 at the age of 91, was a registered professional engineer whose many achievements included inventor, scientist, entrepreneur, banker, businessman, attorney, ham radio operator, sportsman, and humanitarian. He was a Rotarian for 54 years, held several leadership positions in Rotary, and served as president of Rotary International, the world’s largest service organization with more than 1.2 million members.

In addition to his Rotary service, Archer was active locally with the YMCA, Boy Scouts of America, Dearborn Schools, and Henry Ford Hospital.

The scholarship process is totally web-based, with applications available on the Rotary Club of Dearborn website, www.dearbornrotary.org, and with all communications handled via email. Applications are judged by three Rotarians. This year, the scholarship committee reviewed 17 applications. The scholarship has been awarded annually for the past seven years.

In addition to maintaining high academic standards, Ghandour accumulated more than 300 hours of volunteer service. He led friends in restoring Hemlock Park, and for three years shadowed a local physician for three years who tends to younger patients. His leadership roles include tennis team captain for two years, founder of the Science National Honor Society at Fordson, co-founder of Fordson Chemistry Club, four-year member of the Pre-Med Society and president for one year, and Key Club board member for three years.

Ghandour’s honors and awards include class salutatorian, attendance at the National Youth Forum of Medicine, and recipient of the Western Wayne Athletic Conference All Academic Award. Reference letters described Ghandour as “honorable,” “respectful,” “social,” resilient,” and “responsible young adult who believes education to be the key to success in life.”

Ghandour plans to study pre-medicine at University of Michigan. After accepting the award, Mohamed thanked Hugh Archer, Dearborn Rotary Club, and his parents. He described the scholarship as “truly an honor for him”.