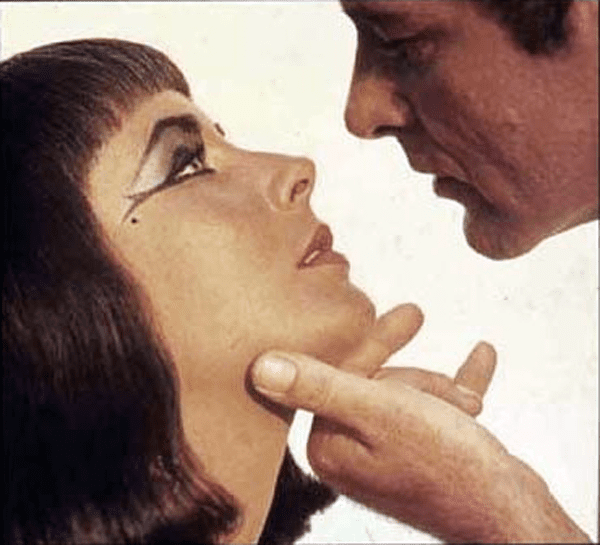 HOLLYWOOD — Elizabeth Taylor and Richard Burton are together again. The Hollywood Chamber of Commerce finally decided to give Burton a star on The Hollywood Walk of Fame to commemorate the 50th anniversary of the making of “Cleopatra.” It also decided to place him right next to Elizabeth Taylor. Their daughter, Maria Burton, was on hand for the unveiling.

From the moment Taylor and Burton met on the set of “Cleopatra” in 1963, they became front-page news. Twentieth Century Fox claimed the $44 million it cost, due to going way over budget and Taylor’s $1 million salary, nearly destroyed the studio. Their budding love affair destroyed her marriage to singer Eddie Fisher. The film eventually recouped its cost, bringing in $57,777,778 in revenues.

It was Liz’s salary that so infuriated Fox’s biggest star, Marilyn Monroe, who only made $100,000 per picture. She misbehaved in order to be fired, so she could renegotiate her contract.

The Burtons were married twice, from 1964-74 and 1975-76, and starred in 10 films together, including “Cleopatra,” “The V.I.P.s,” “The Sandpiper,” “Who’s Afraid of Virginia Woolf” (for which Elizabeth won her second Oscar award) and “The Taming of the Shrew,” all of which made big money. Their box-office decline began with “Doctor Faustus,” “The Comedians” and “Boom,” which many critics referred to as “BOMB.” They also made “Under Milk Wood,” “Hammersmith Is Out” and a TV film, “Divorce His/Divorce Hers.” In 1983, after Burton had remarried, they toured in Noel Coward’s play “Private Lives.”

The British were less than thrilled with the 2012 biographical TV film “Liz & Dick.” They were appalled that New Zealander Grant Bowler was chosen to play the Welsh-born Burton, and called Lindsey Lohan (Liz) “a certified train wreck.” So now, the Brits are shooting their own film, “Burton and Taylor,” to star “The Wire’s” Dominic West, born in Sheffield, England, and Helena Bonham Carter in the title roles. The BBC’s upcoming TV movie will focus on Burton and Taylor’s time touring in the stage play “Private Lives.”
* * *
BITS ’N’ PIECES: David Fincher, who scored with “The Girl With the Dragon Tattoo,” has quit as director on the proposed remake of “Cleopatra,” with Angelina Jolie as the Queen of the Nile. A new director is being sought. … Daniel Radcliffe and Emma Watson, in an obvious attempt to distance themselves from “Harry Potter,” are zeroing in on new films. Emma is all but signed to play “Cinderella” in a live-action version at Disney, and Daniel is in final talks to star in yet-another version of … “Frankenstein.” No, he won’t be Dr. Frankenstein or his monster — he’d be his trusted assistant, Igor! What hump?