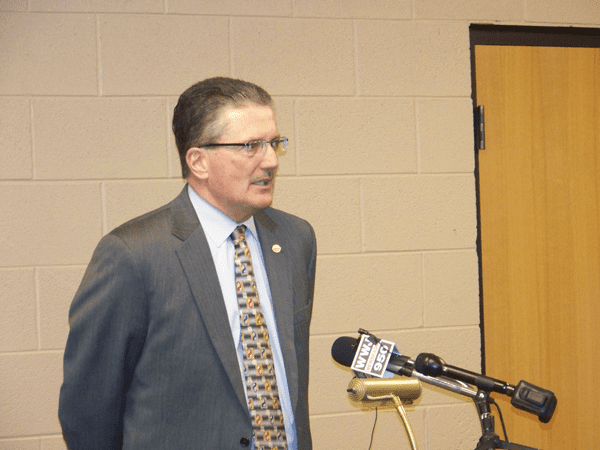 Southgate Community Schools Supt. William Grusecki said the suicide Thursday morning was well handled by Davidson Middle School staff, and that no other students were in danger when 14-year-old Tyler Nichols took his life with a single gunshot. Grusecki asked parents to not send students to school with backpacks to help expedite security when Davidson reopens Monday.

By JAMES MITCHELL
Sunday Times Newspapers
SOUTHGATE — Police and school officials continued looking for answers as to why a 13-year-old student killed himself Thursday morning at Davidson Middle School.

Southgate Public Safety Director Thomas Coombs said that the weapon was a .40-caliber Glock handgun, and that Nichols died from a single, self-inflicted gunshot to the head.

Southgate Community Schools Supt. William Grusecki said that teachers and staff immediately went into “safe mode lock-down.” The eighth-grade students were taken to the auditorium while ninth-graders were locked in the gymnasium until police cleared the scene.

Grusecki said that at no time were any other students considered to be in danger. Once Nichols was taken to Oakwood Southshore Medical Center, parents were asked to go to the school and sign out their children. The building was emptied of students by 11:30 a.m., and remained closed Friday.

Coombs said that hospital officials found a note that appeared to be a suicide letter. In it Nichols said goodbye to another student at the school and made made vague references to the drama and pressures he felt.

Although some students and social media indicated that Nichols had been subjected to bullying in one form or another, Grusecki and Coombs said that no evidence or witnesses have thus far proven that.

After a press conference held Thursday, Grusecki said the boy was somewhat popular, a good student and that there was no record of his having approached any teachers or staff with regards to a bullying issue.

“The only person who can answer why he did it is no longer here,” Grusecki said. “It can happen anywhere. We had no idea that he came to school armed.”

More than 800 students attend Davidson, and all enter the building through the main doors. The school does not have metal detectors. Once first period begins, Grusecki said the school doors are locked.

Davidson was closed Friday. When classes resume Monday students will be searched. Grusecki asked parents not to send students to school for the time being with backpacks or bulky outerwear to help facilitate the start of the day. The district will evaluate its safety procedures, Grusecki said.

Counselors will be on hand, “for as long as they’re needed,” Grusecki said, to work with students through the grief and mourning. Counselors also will be available for staff as needed.

Grusecki applauded Davidson teachers and staff for first ensuring the safety of the students. Grusecki and Coombs met with school employees Thursday morning after the students had been sent home. Grusecki said that was when the shock caught up with the educators.

“It got pretty emotional with the adults,” Grusecki said. “They had dealt with the kids and parents first, but once we sat down you could see it in their faces.”

Coombs said that investigators would continue interviewing family and others. The gun was determined to have belonged to a family member, and Nichols knew where it was kept. It was unknown at press time what, if any charges, might result.

“They’ve spoken to a few students and it does not appear there was bullying,” Coombs said. “If we can determine any reason (why) that might be helpful to the school, maybe they can help another student.”

More than 300 people gathered at the school Thursday evening for a candlelight vigil in Nichols’ honor.