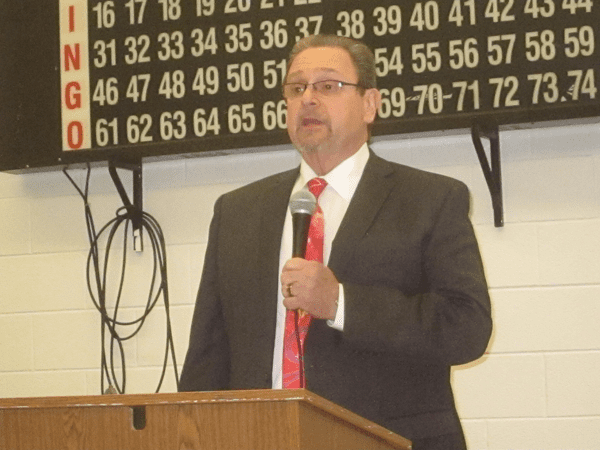 By ANDREA POTEET
Sunday Times Newspapers
WYANDOTTE – Two residents are going head to head for the city’s open assessor seat in its May 7 election.

Tom Woodruff and Jerry Kupser were among the 15 candidates who came to the Copeland Center March 6 for a candidate’s forum hosted by McKinley Neighbors United and Garfield Neighbor’s United. Both are running for the seat vacated by the retirement of Colleen Keehn.

Woodruff owns Downriver Stone Design in Wyandotte with his wife. He helped start the Wyandotte Veteran’s Task Force and is a member of many veteran’s groups as well as the Salvation Army’s Advisory Council.

To prepare for the seat, he said he has attended meetings of the Michigan Tax Tribunal and if elected hopes to focus on fair and proper assessments.

He said he will use his former training as a real estate agent and his business’ focus on service to help serve the residents.

“My campaign is about serving all our citizens and the business community with fairness, integrity and excellent service,” he said.

Challenger Jerry Kupser served nine years on the Wyandotte Public Schools Board of Education and retired after 35 years with the city’s electrical department.

He said his experience in budgets will help him with many of the new ideas he has for the job, including making sure all rental properties are declared, reviewing assessment procedures to make sure everyone pays the correct amount and striving to have an “open door policy” in the department.

He said as a retiree, he won’t take city-issued health care, which will save the city money.