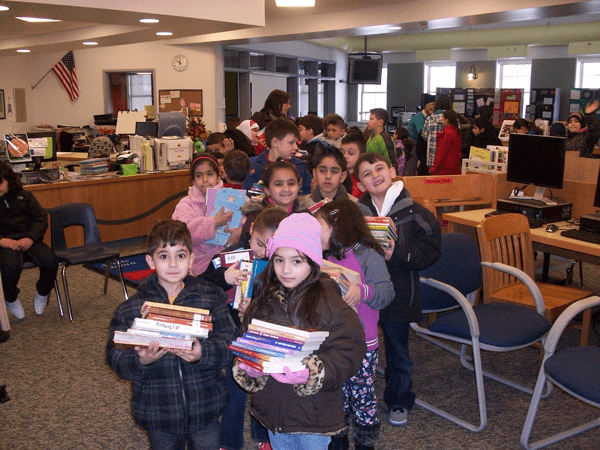 The 11-year-old has given back to his community for years and during an NBC Education Nation stop at the school during its nationwide tour, Mabchour and hundreds of community members donated about 4,000 books March 25.

Recipients of the book drive — 65 metropolitan Detroit neighborhood-based “high need” – United Way Early Learning Communities — were not the only ones who received something valuable.

“I learned that you should help others because it is the right thing to do,” Mabchour, who donated eight books during the drive, said. “I think it is important to help others if they need something you have a lot of.”

The ELC offer access to children’s books, toys and parenting resources that may be borrowed for use at home or other settings.

Geer Park administrators found out about the book drive from a district-wide email sent five days before the drive. They were the only area elementary school chosen for the drive.

“We were the only stop in Dearborn and we only had a five-day notice and we collected thousands of books,” Awada-Zeaiter said.

Awada-Zeaiter said collecting the books in such a short time was “unique” because about 80 percent of the students are “economically disadvantaged.”

But that was no deterrent, she said.

“No matter how much we have or don’t have, there are always people who always have less than you do,” she said. “You do what you can to make a difference.”

During the book drive, representatives of WDIV Channel 4 —the Detroit NBC affiliate — broadcast live in front of the school and students, teachers and community members dropped off the donated books in large cardboard boxes inside the Education Nation bus, which also toured the metro Detroit area collecting new and gently-used books for the United Way for Southeastern Michigan.

The United Way plans to donate the books to UWELC and affiliated hospitals and area high schools.

Geer Park Interventionist Coach Beth Gorman, who helped during the drive, said she tries to instill in her students the importance of giving to the less fortunate.

Gorman, who works with at-risk readers and writers at the school, said the students were very excited about the drive.

“(Students) looked at home; teachers cleaned out their basements and closets looking at things that could be donated; and some purchased new books,” Gorman said. “We had so many books that they didn’t have enough boxes. It was very successful and I am very pleased.”

Mabchour, who has donated to book drives before, was also pleased about collecting the books after he asked permission from his parents.

“I had plenty of books I didn’t read and when I found out (about the drive) I decided to give some books,” he said. “I also bought some. I would do it again because I have a good feeling when I help others.”