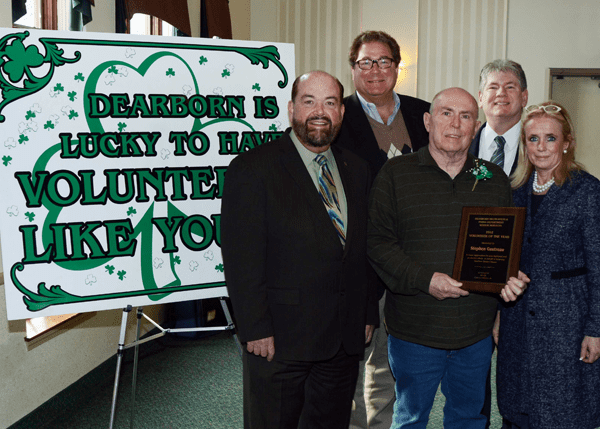 Photo courtesy of the city of Dearborn
Dearborn Mayor John O’Reilly Jr. (left) presented Stephen Gautreau (third from left) with a plaque to commemorate his being named the 2013 Volunteer of the Year during the annual Volunteer Breakfast on March 13. Gautreau gives most of his time to the Meals on Wheels program. He was also congratulated by Kevin Kelly (second from left) of Wayne County; Wayne County Commission Chairman Gary Woronchak; and Debbie Dingell, representing her husband, U.S. Rep. John Dingell.

DEARBORN – Stephen Gautreau knows the benefits of unselfish service to others.

That attitude and an outstanding commitment to helping others earned Gautreau the distinction of being named the 2013 Volunteer of the Year by the Dearborn Senior Services Division on March 13.

He was honored by Mayor John O’Reilly Jr. and congratulated by other elected officials during the annual Volunteer Breakfast, during which dozens of Dearborn residents are recognized for helping seniors through the Meals on Wheels program, income tax preparation, exercise classes, processing bus passes, and working on the newsletter.

Gautreau said the most rewarding volunteer job he has is delivering meals on Wheels to homebound senior citizens in Dearborn. He acknowledged all the volunteers being thanked for their Meals on Wheels service and other efforts.

“Without volunteers like you, Dearborn wouldn’t be the great community that it is,” Gautreau said.

He is credited with assisting on every Dearborn route in the Meals on Wheels program, experiences that put him in touch with frail seniors who not only need daily nutrition, but compassionate human contact.

His volunteer service also includes contributions at the Dearborn Historical Museum, including helping to restore the Commandant’s Quarters and the McFadden-Ross House.

He is vice president of the Dearborn Community Arts Council, which is in charge of the Padzieski Art Gallery inside the Ford Community & Performing Arts Center. He hangs artwork and adjusts the lighting for maximum impact for each show.

Gautreau retired at the age of 65 after working in the family pallet business. Although his schedule remains busy with his unpaid activities, he appreciates having a little more flexibility than when he was working.

“It is great being retired,” he joked with the breakfast audience. “I can volunteer in the morning, and take a nap in the afternoon.”