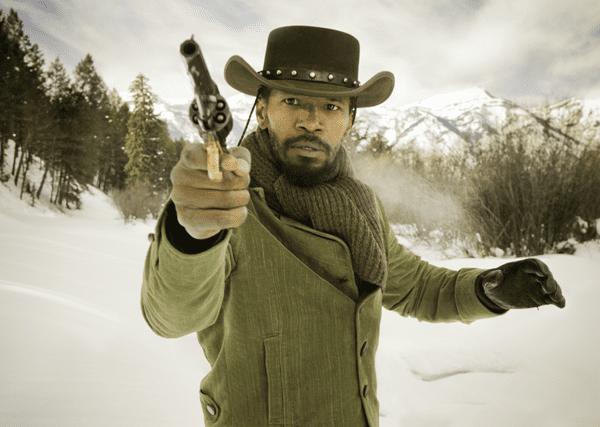 PICKS OF THE WEEK
“Django Unchained” (R) — Quentin Tarentino serves up another pithy revenge story, this time setting the carnage in the pre-war South. Django (Jamie Foxx) is a slave who lost his wife to an especially cruel master (Leonardo DiCaprio.) Fate gives him another shot when he is bought, freed and then hired by a German-born bounty hunter (Christoph Waltz). Together, they go from plantation to plantation, hunting fugitives and tracking down Django’s lost love.

While the bullets and witty rejoinders fly, “Django” keeps you involved despite its one-sidedness. Without the sense of real conflict, the story doesn’t rise above revenge fantasy. It’s not Tarentino’s finest, probably not even top five, but undeniably fun. Viewers sensitive to shoot-outs and coarse language won’t last five minutes. This is DiCaprio’s first time playing the villain, and he delivers.

“Save the Date” (R) — Sarah (Lizzy Caplan), a sardonic, 30-ish bookstore manager, receives an unwelcome and comedically misfired proposal from her boyfriend. Embarrassed, she dumps him and moves on … perhaps a little too fast. Sarah’s sister Beth (“Mad Men’s” Alison Brie) is oblivious to this mess as she is wrapped up in planning her own wedding. As the sisters realize their lives and relationships are all screwy, they run home to Mom and Dad for reassurance, only to find that their folks are just as lost.

This is not a love-dovey romantic comedy, nor is it a thought-provoking indie-flick. “Save the Date” is in the weird in-between space, where the story is neither insightful nor comforting, just sort of there. Caplan and Brie are positively sublime, but without a script to support them, their full abilities are left out of this film.

“Spies of Warsaw” — Poland must have been a pretty tense place in 1937, with the Germans gearing up for an invasion and little that could be done to stop it. Too bad this British TV mini-series is pretty tame — given the circumstances. Adapted from a novel by American author David Furst, the high-budget production brings the historical fiction to life. David Tennant (who made a fine Doctor on the sci-fi series “Doctor Who”) plays French military officer Jean-Francois Mercier, a smooth operator who can convince well-to-do ladies to forget themselves for a bit.

“Future Weather” (R) — This environmentally conscious indie-movie follows Lauduree, a Midwestern teen whose mother gave her only a weird name. When Lauduree’s mother runs to LA to become a makeup artist, the teenage girl is left with her rather frigid grandma. Lauduree’s issues are explored through her interest in the science of global climate change. Her fears for the future and concerns about human responsibilities are discussed within the context of science. The environmental messages are overt, but the real story is how they are used to explore the character.