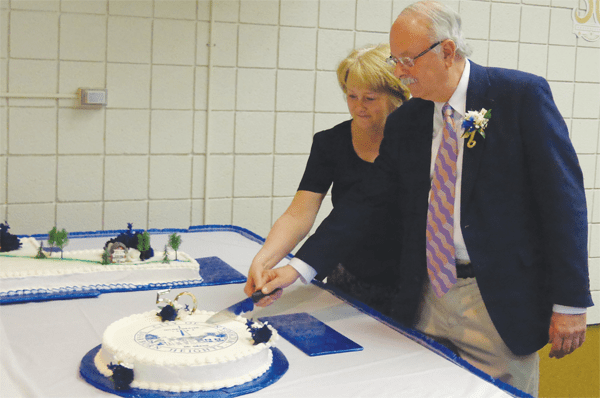 Heights marks milestone
Photo by Bob Oliver
Dearborn Heights Mayor Daniel Paletko (right) cuts the first piece of the 50th anniversary cake with its creator, Karen Kasrzyk. The cutting occurred during the celebrations of the golden anniversary at City Hall.

By BOB OLIVER
Times-Herald Newspapers
HEIGHTS — The city’s past came to life recently as it celebrated a milestone anniversary.

Residents and elected officials gathered at Dearborn Heights City Hall to celebrate the 50th birthday of the city with a party and cake-cutting ceremony on April 8.

The celebration came 50 years to the day that the Michigan Supreme Court approved the incorporation of the city.

A large crowd was greeted with several displays of both the past and present of Dearborn Heights, including boards with historic photos of the city and posters hanging on the walls with the names of residents who had lived in the city the whole 50 years. There were also police, fire, and public works vehicles stationed around the building for the public to view.

“It’s really great,” City Councilwoman Janet Badalow said. “It’s nice to see all the people and share their stories about the city.”

Badalow was one of many city officials past and present who attended the event. She was joined in the crowd by former Mayor Ruth Canfield, state Rep. David Knezek (D- Dearborn Heights) and others.

The ceremony began with a speech from Mayor Daniel Paletko and the presentation of awards for the three finalists of the fourth-grade essay contest entitled “Growing Up in Dearborn Heights: Then and Now.”

Paletko spoke of his past in the city and the community interest in the 50th anniversary date.

“I think what’s been special about the last few weeks and months is how many residents and former residents have come in the office and shared such good memories about Dearborn Heights,” he said.

After the introductory speech and award presentation the standing-room-only crowd watched as Paletko cut the ceremonial cake with its creator, Karen Kasprzyk.

The cake, which was baked in the shape of the city and featured several different flavors, was then passed out to those who were in attendance.

“This was a really nice event,” resident Linda Ford said. “The cake was delicious and we really enjoyed the displays and the police and fire presence outside.”

Council Chairman Kenneth Baron also observed the interest the public had in the historic photo displays.

“People have really enjoyed the displays,” Baron said. “It’s really nice to see people going through the old photos and saying ‘I remember that!’”

Following the events at city hall was a presentation on the history of Dearborn Heights at the Caroline Kennedy Library by Library Director Michael McCaffery which lasted about 90 minutes.

The party was planned by a committee which included Paletko and McCaffrey and was created without the use of any tax dollars.

The city also has other 50th anniversary events planned throughout the year. The next will be an open house at the Wallaceville (Little Red) Schoolhouse on May 19.