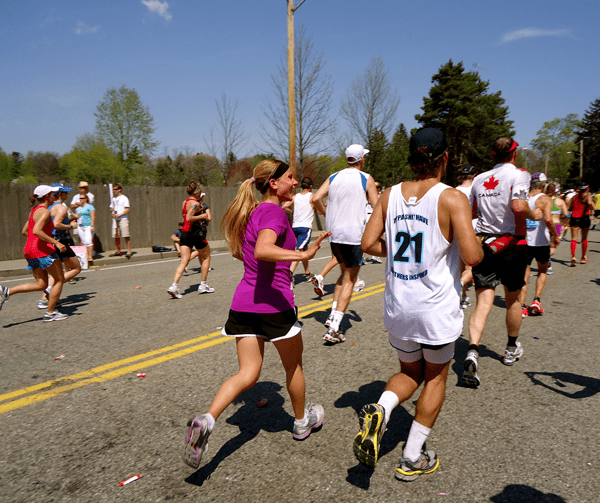 By ANDREA POTEET
Sunday Times Newspapers
WYANDOTTE – The first text message came before Audrey Peters had even heard the news.

The 21-year-old Wyandotte resident had finished her second Boston Marathon about 30 minutes before 2:50 p.m. Monday, when two bombs made from kitchen pressure cookers packed with shrapnel exploded near the race’s finish line, killing three and injuring more than 180.

As of press time Friday one of two suspects had been killed in a car chase and shootout with police while the other was on the loose and the city was on lock-down, with authorities warning residents to stay home.

When the first of a flood of text messages arrived on her cell phone seeking confirmation that she was OK, she hadn’t yet seen the news footage detailing the carnage or heard any details about the attack at the 116-year-old event.

“It’s just been a crazy thought for me to grasp, even though I didn’t experience seeing it,” Peters, 21, said. “It’s a scary thought to think that I was close by and it could have been me.”

The message came while Peters was walking back to her hotel from the race, one of the many she would receive via phone and Facebook that day. She said she is touched by the outpouring of concern.

“It’s an unexplainable feeling to describe the amazing love I felt from my family, friends and others I know that were thinking of me on Monday,” she said. “Many people were worried about me that day because they knew I was running the race. I am thankful that my family and I are safe.”

Soon after the initial text message, Peters and her friends ducked into a nearby restaurant and then saw the news reports on television. Still wearing her race bib and running clothes, she said she could read the looks on the faces of the other diners when they saw her.

“They looked at me like ‘I don’t think you want to watch this,’” she said. “It was shocking to see it. I couldn’t believe it happened at first.”

It was the second consecutive Boston Marathon for Peters, who has been running competitively for two years and completed nine marathons.

“The race was an extremely fun experience,” she said. “It was a fun day. The whole 26 miles, and then cheering the other runners on. It was a really fun day and then a fun day suddenly got ruined by the tragedy.”

But Peters said the shock will not deter her. She qualified for next year’s marathon and after the recent announcement by the Boston Athletic Association that the race will continue as planned, Peters said she plans to be there to finish it for the third year in a row.

“I’m hoping it doesn’t ruin the Boston Marathon,” she said. “It’s been such a big and fun event. I’ve heard more people want to sign up to show the people that did this that they aren’t gonna stop.”

She said while many are fearful of the yet-unknown suspects who planned the bombings, she prefers to think about the runners who immediately came to the aid of those who were injured.

“There were hundreds of people that showed amazing and loving hearts, courage and strength by running toward the bombs to help the victims of the tragedy,” she said. “We need to be grateful and thankful that there are amazing people in our world like them.”