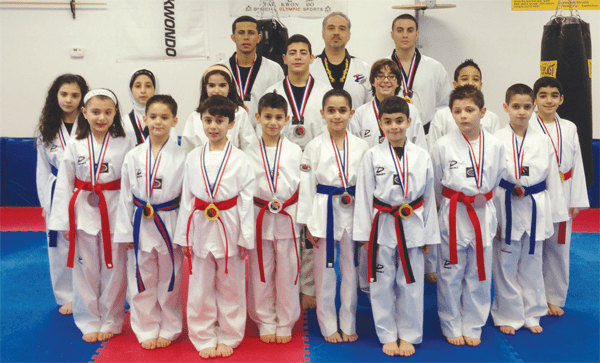 More than 270 people from across the country competed for a chance to advance to the Junior National or World Class Senior National Tae Kwon Do Championships in July in Chicago.

All 18 Koubeissi students — ranging in age from 7 to 23 — advanced to the nationals, winning eight gold medals, eight silver and two bronze.

Koubeissi said the medal count was “a remarkable accomplishment … especially considering that each athlete was required to fight using the new Daedo TrueScore Olympic-style equipment, which presented a challenge by itself.

“Even though the pressure was on like never before, (the) students relished this opportunity. These athletes spent several months preparing for the state championships. Countless hours of mental and physical training were necessary in order for each competitor to fully prepare themselves to endure the challenges of competing at such a high level.”

He said all he asked of his students was to “go out there and compete with confidence, do their best, and leave nothing for them to regret.”

The Okemos tournament was the largest Tae Kwon Do championships ever in Michigan. The Koubeissi students ranged in age from 7 to 23.