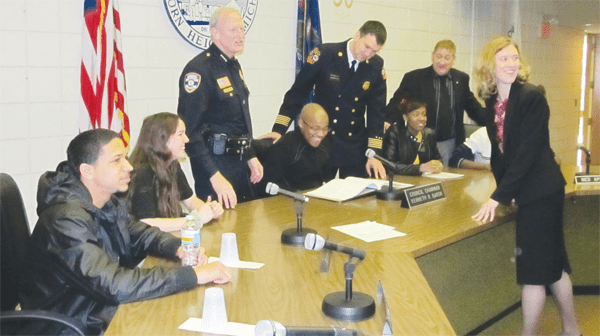 Across the city 28 high school students, members of Robichaud’s Interact Club, a teen branch of Rotary International, job-shadowed adults in public and private sector jobs as part of a 20-year program established locally by the late Equilla Bradford.

Lynne Killion, public relations chair for the Rotary Club of Dearborn Heights, said students job-shadowed at the city library, fire department and local businesses before meeting for lunch at the Equilla Bradford Administrative Center in the Westwood School District to share their experiences.

Senior Andre Brooks, 18, who job shadowed City Clerk Walter Prusiewicz, said working with him and getting a behind-the-scenes look at how different city departments work was a fun and interesting learning experience for him.

He said the amount of paperwork city employees must process surprised him.

“When I went to each department it’s like they were overworked but understaffed,” Brooks said. “It seemed like each person had a lot on their plate.”

Prusiewicz said it was enjoyable to work with a student who was interested in learning more about local government.

“I like working with young students,” Prusiewicz said. “It’s encouraging to have them learn that some of the most important decisions are made at the local level.”

Prusiewicz would like to see more programs to make students aware of what is happening in their community and how they can take an active role.

“I hope that out of the five students here, that one of them finds their way into public service, because it’s a very rewarding career,” Prusiewicz said.

DeShazor said she requested to shadow someone in human resources because her mother does that type of work in the private sector.

“I kind of wanted to take a journey into her world and what she does every day,” DeShazor said. “It was kind of nice seeing exactly what they do and how much responsibility they actually do have to make everything run smoothly.”

DeShazor said the many different jobs and work components done by city hall employees surprised her.

She also thinks she will pay more attention to city government issues in the news now because she now understands the process better.

Hill, who also job-shadowed Sobota-Perry, said he expected to see many hard workers in the Human Resource Department, and he did. However, he hopes his future jobs are more active and allow him to move around more, and are not paperwork-intensive like those he saw at City Hall.

Police Chief Lee Gavin’s job-shadowing students had a more active experience when they followed the K-9 unit around their high school.

Sophomore Maurice Gunn, 16, said he asked a K-9 unit officer many questions about his job.

He said the job-shadowing experience reminded him that he has two more years of high school to think about what type of a job he would like to do and what type of college degree he wants to pursue.

He said the way police officers must frequently think “outside-the-box” surprised him.

“How you see (officers) on TV is not real,” Gunn said. “This job will put your life in jeopardy – anything can happen. Then again, it could be really fun.”

Junior Ariel Fultz, 17, who also job-shadowed Gavin, is considering a career in law enforcement, perhaps as a detective, or with the FBI.

Both Fultz and Gunn hope encourage other students to apply for the job-shadowing program next year.

“I think it’s an experience that more people should take advantage of,” Gunn said. “It’s a great learning experience.”

Sobota-Perry added that students might not realize how much influence local government has on their lives until they see how it works first hand.

“They don’t realize the amount of day-to-day impact that local government actually has on their lives, where they live, where they end up having homes,” Sobota-Perry said. “Dearborn Heights has a solid recreation program, solid police, fire – these are things that they, growing up, would want in their community, and it is people here in these offices that make the decisions.”

She said she is fortunate to get to hire people to serve the community, and she hopes she inspired some future public servants among the students who job-shadowed.

“You want to bring like-minded folks on that feel committed to public service,” Sobota-Perry said. “We’re not chasing a profit. Our ‘stockholders’ are the public.”