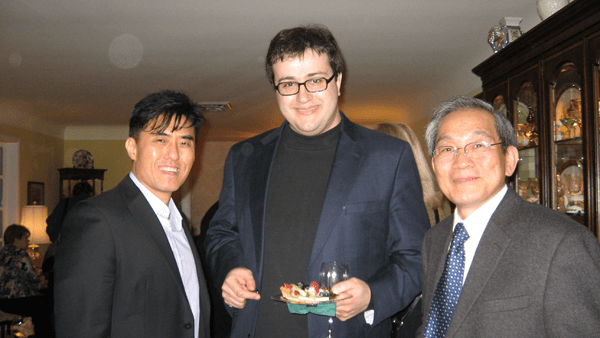 One of the country’s great pianists Gleb Ivanov performed with the Dearborn Symphony at the Ford Community & Performing Arts Center April 12 and played his inimitable styles to a crowd of music lovers and especially those who love concert grand entertainment.

Back by popular demand, it was Ivanov’s second appearance with the Dearborn Symphony.

What really brought the most applause was Ivanov’s performance of “Piano Concerto” by Edvard Grieg. Many were humming the tune as he played.

Of Russian decent, Ivanov lives in upstate New York. He was the guest of honor at an afterglow party at the home of Dearborn Symphony President Sandy Butler and her husband, Paul.

Ivanov played one short piece on the Butlers’ grand piano, but, on the heels of his energy-absorbing performance earlier in the evening, it was obvious he was exhausted by 10 p.m. and though coaxed by more than 40 guests, he declined a post-concert performance encore.

He was joined in several conversations by Dearborn Symphony Conductor Kypros Markou and Paul Yeon Lee, a composer, arranger and music engraver, who also appeared on the Dearborn stage introducing his many sights and sounds in his rendition of “Rapid Fire.” Lee remained in the audience and later took a bow on stage.

The evening’s concert was well accepted by the audience. The crowd included Dearborn’s music lovers and members of Friends of the Dearborn Symphony.

The season winds up with its “Quest for Liberty!” concert at 8 p.m. Friday featuring Beethoven’s well-known “Symphony No. 1” and ending with another familiar score, “Finlandia” by Jean Sibelius.

On sage with the Dearborn Symphony will be the Dearborn Youth Symphony and young musical artists, winners of this year’s solo competition.

Tickets are available by calling the Dearborn Symphony office at 313-565-2424.