Photo by James Mitchell
In conjunction with activities leading up to the weekend’s Pow Wow in Council Point Park, Forgotten Harvest on Thursday held a community food distribution session, at which vendors made available a variety of Native American specialties. The Pow Wow, commemorating the 250th anniversary of Chief Pontiac’s historical regional council, concludes today.

By JAMES MITCHELL
Sunday Times Newspapers
LINCOLN PARK — In some ways, the activities of the past few days echoed historic events from 250 years ago, with visitors from throughout the region gathering near the Ecorse River.

Lincoln Park Historical Museum Curator Jeff Day said that during the historic council, Pontiac welcomed hundreds of chiefs and warriors from tribes including Ottawa, Potawatomi, Wyandot (Huron) and Chippewa. The council made plans to capture forts throughout the Great Lakes and Ohio Valley regions and regain control from the British of territories that had been disputed during the French-Indian War.

The council — plans from which to begin with an attack on Fort Detroit evolved into “Pontiac’s War,” which had been among the largest efforts by Native Americans to maintain ancestral homelands — was commemorated Saturday with the placement of a new Michigan Historical Site Marker at Council Point Park, and the American Indian Movement’s annual Pow Wow yesterday and today. (The Pow Wow runs today from 10 a.m. to 6 p.m., with grand entrance set for 1 p.m.)

Day said that the events — partly funded by Chrysler — included a host of speakers and cultural education programs. On Thursday a Classic Pontiac Car Show filled the park with a reminder of how iconic the Chief’s name has remained, and Friday’s events included a concert by Bill Miller and twilight showing of the documentary, “Older Than America.”

The festivities also took place further upstream on Friday, with the annual canoe border crossing from Belle Isle to Windsor; Lincoln Park Mayor Patricia Diaz Krause was to be among the travelers recreating the centuries-old commute.

Day said that donations were welcome to help defray the costs incurred by the American Indian Movement of Michigan, a 501(c)3 nonprofit organization: For information contact AIM at 313-427-0631, or go to the Lincoln Park Historical Museum’s site, www.lphistory.org. 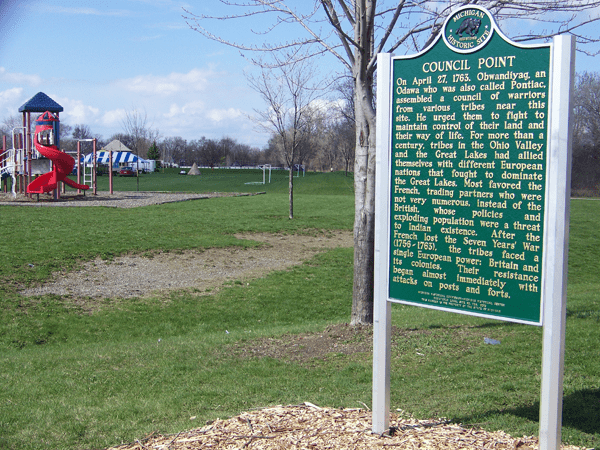 Photo by James Mitchell
The historic marker at Council Point Park describes how Obwandlyag (Chief Pontiac) near this spot in 1763 to plot resistance against local British rule.