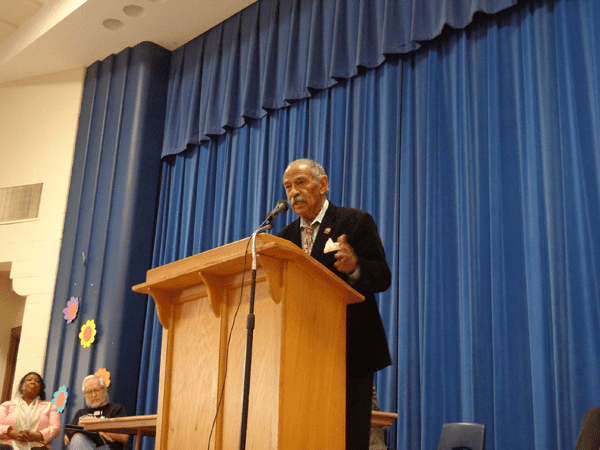 The Regional Gun Violence Prevention Rally was held on April 20 in the auditorium at Lindbergh Elementary on North Waverly in Dearborn. The event was organized by the nonprofit group Organizing for Action with the aim of giving participants a broad view of the impact of gun violence and more information on what could be done to curtail it.

A board that included Dearborn Mayor John O’Reilly Jr. and U.S. Rep. John Conyers (D-Detroit) spoke to a crowd of residents from Dearborn and the surrounding areas about changes they would like made to current gun laws.

The five legislative changes that the called for were: universal background checks for all gun purchases, a ban on assault weapons and high-capacity magazines, increased access to mental health resources and a strengthening of gun trafficking laws.

“We know that we can’t stop gun violence completely, but we can certainly make a change,” North said. “These steps will combat the growing numbers of those affected by violent acts from guns.”

North said that she does not believe the people who say background checks for new gun owners will not make a difference.

O’Reilly is a member of the National Mayors Against Illegal Guns coalition, which has more than 900 members in 45 states. He said the organization was a good example of a rational approach to dealing with a “very overwhelming and controversial problem.”

O’Reilly said the groups recommended law changes do not conflict with Supreme Court’s interpretation of the Second Amendment.

The cases he referenced were District of Columbia v. Heller (2008) and McDonald v. Chicago (2010). In Heller, the Court decided that individuals had the right to possess a firearm outside of a militia but that the right was not unlimited. In McDonald it ruled that the Second Amendment limited state and local governments to the same extent that it limited the federal government.

O’Reilly said that since the proposals the group was offering were not infringing upon the rights offered by the Second Amendment the discussion should be “on whether it is the right thing to do or not.”

“What we’re looking at as mayors is what things can be achieved that will have impact and aren’t so costly that we can’t afford it,” O’Reilly said. “There are some things we just can’t afford to do or the cost will not have a return on the investment. So, we need to be prudent.”

Conyers spoke to the crowd about failure of the U.S. Senate to pass a new law requiring background checks a few days before the rally. The bipartisan Manchin-Tooney amendment had a majority of 54 votes in the Senate but fell six votes shy of the super majority that was needed.

He also said that gun-related killings are not widely discussed because they usually don’t involve many people being killed at one time.

“Thirty-three people are killed by firearms every day in America,” Conyers said. “If this was a mass incident we would solve the problem. The reason we don’t is because we don’t know where all these tragedies take place.”

Conyers also said he was interested in talking with individuals opposed to gun restrictions.

“I’d like to have a conversation with them, not a debate,” Conyers said. “A debate is something people or teams prepare to win an argument. It has more to do with the skill of the argumentation.”

He added that a healthy conversation between the groups could help work toward common ground between the sides.

In attendance at the rally were many people from Dearborn and the surrounding areas.

“It was powerful,” Eugenia Bajorek said. “I will certainly bring this back to my community in Oakland Township. We’re passionate about this issue. It’s such an important issue for so many of us.”

Detroit resident Carlos Gomez attended the rally with his wife, Wendy. He said that they came because their lives had been affected by gun violence.

“I thought it was really important to be here today to support weapon regulations because society needs to be safer,” Gomez said. “We need to try to combat the craziness. I hope we can have more rallies and I hope that more people become supporters. The more people there are, the better our chances of being heard by Congress.”

Outside of the elementary school a group of protesters formed to show their opposition to gun regulations.

Ben Shattuck of Waterford said he drove to Dearborn because he disagreed with the measures proposed at the rally.

“Gun control regulations are getting ridiculous. The Second Amendment gives you the right to keep and bear arms,” Shattuck said. “It’s been re-affirmed by the Supreme Court on three different occasions. All of the measures they want to take are an infringement on our constitutional right.”

Matt Schonert of Hamtramck was also opposed to the measures.

“I’m opposed to any gun control,” Schonert said. “I feel that it’s harmful and mostly infringes upon law-abiding citizens, rather than dangerous citizens. I’m opposed to all of it: the assault weapons ban, high capacity magazine ban and background checks.”