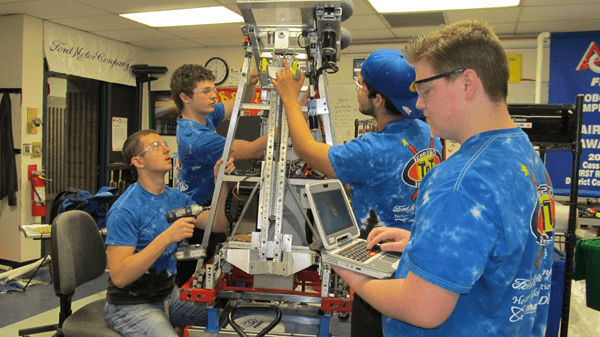 “It’s now career technical education,” Horth said. “I get to work with the brightest and the best. Their work ethic is absolutely incredible.”

Over the last 15 years, the robotics team, which meets at the Taylor Career Center, 9601 Westlake, has produced at least 15 engineers and 25 scientists, Horth said. He said one of the first robotic team graduates is working on a doctorate in microbiology.

“She has vowed that when she… develops something new, she’s going to name it after Mr. (James) Vandette, who was the science teacher who helped start this team and was her favorite teacher.”

Vandette died of cancer several years ago, and the robotics lab has a plaque honoring him.

Science teachers from each of Taylor’s two main high schools, Kennedy and Truman, and a career center teacher formed the team 15 years ago, and they secured a grant to start the team.

During a given school year, about six engineers from Ford Motor Co. serve as adult mentors.

The robotics team attends two district events each year and a state event if they qualify. The district events have a limited six-week build period, during which students construct and program a robot to score points across a prescribed game course autonomously (without real-time human input) and without remote (human) direction.

This year their robot threw a Frisbee at targets, climbed a pyramid platform and operated for the first 15 seconds autonomously, under its own control, then for two minutes operating remotely under human control.

Their $5,000 annual registration fee entitles them to two district events and a kit of supplies, which they use as the basis for building their robot.

This year the team competed in the Detroit-Centerline and Livonia district events, at which they earned points to qualify for the state competition, Horth said.

They joined 64 high-scoring teams from Michigan’s district competitions at the state meet April 5 and 6, where Horth said software and bandwidth problems plagued them the first of two days, hurting their point total.

“We didn’t have any vision systems on the robot to do what we needed to do well (the first day),” Horth said. “We were able to circumvent that on Saturday (April 6, the second day), and on Saturday we had the greatest match we had all weekend, so at least we went out with a bang.”

The robotics team attracts all types of students, from “wrench monkeys” who love to take apart and build things, to studious participants who are adept at math and love to program the robots, figuring out the angles, velocities and torque ratios, Horth said.

“We really get a great mix of students,” Horth said. “We have cross town rival high schools on the same (robotics) team.”

Senior Jared Rexford, 18, said he has always wanted to be an engineer. He started building with Lego blocks, and works with the robotic team build crew.

“I just love to build the robot and I love wiring it and putting it all together,” Rexford said. “I am also one of the machinists… it’s pretty much fun all the time.’

Rexford took a shop class at school to learn machining because he was concerned about the robotic team having enough machinists.

Rexford recruited Grant Okdie, 16, a junior, who has been on the team for three years and who also wants to be an engineer.

Okdie said when he was younger he liked to go to Home Depot with his parents, and pick up random pieces from the floor and look at how things might fit together.

Robert Montes, a 17-year-old junior, did not know what he wanted to be until Rexford and Horth got him involved with the robotic team, and now engineering interests him.

Sophomore Adam Vick, 15, whose older brother introduced him to the team, likes to program robots.

Horth has encouraged a business technology teacher at the career center who teaches programming to offer a class in LabVIEW, the software they use for robotic programming, in a class next year, using a past-year robot for hands-on programming learning.

Career technical education is important to high school students to help them make career choices that are good fits for them before they start college, Horth said.

“You come to a place like this while you are in high school… (with) any subject that we teach here and you get a taste for what that career is like, and either you love it or you hate it,” Horth said. “And it helps make the decision when you get to college of what you want to be when you grow up.”

Next year when he starts college, Rexford hopes to come back and mentor the robotic team.

“I can’t wait to help all the new kids with all the new stuff I am learning in college,” Rexford said.