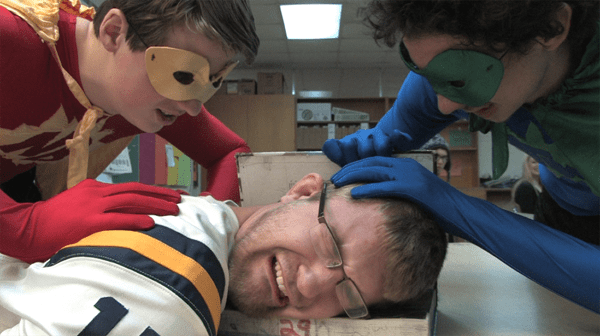 Lights! Camera! Action!
Photo courtesy of DHS Student Video Program
In a scene from “Winnerman,” the former football team quarterback-turned-superhero played by Max Pizzino (right) and helper Jeff Karyczyk (left) exacts revenge on a school bully Spencer Pelker. The film will premiere along with “Becoming Charlie” Wednesday and Thursday at the Michael A. Guido Theater inside the Ford Community & Performing Arts Center. Both films were created by Dearborn High Schools students.

The films, “Winnerman” and “Becoming Charlie,” are running as a double feature both nights. They are the creation of students involved in the DHS student video program.

Every part of the filmmaking process — including writing, editing, and acting — was performed by students in the program.

“These have been the most challenging movies we’ve ever done,” DHS teacher and student video program director Kurt Doelle said. “This has been a lot of work for the students.”

“Becoming Charlie” is a drama based on the true story of a DHS student who lost both of his parents while attending school. The script was written by Emmanuela Jannaro and John Wilson and the film was directed by Andrew Behm.

Several scenes of the film were shot at DHS rival Fordson High, with many Fordson students serving as extras for the movie. Doelle said the staff and students at Fordson were very helpful and accommodating to the visiting DHS students.

The crew also was given assistance in setting up an important scene in the film by the DHS woodshop and Mayor John O’Reilly Jr.

When the star of the film, “Charlie,” receives word that his parents have been killed in a car accident, he responds by physically attacking his surroundings. To film this, the video students approached DHS Woodshop Instructor John Cialone, who had his students create a faux bathroom for the actor to destroy on camera.

The setting of that destruction was a local house that was already set for demolition by the city of Dearborn. Doelle said that O’Reilly helped the students gain access to the house so that they could film the scene.

“Winnerman” is a comedy movie that tells the story of a high school football star risking his popularity to protect a “nerdy” friend from bullies within the school. It was written by Adrian Mikulak and Kevin Juardo and directed by Kara Lynch and Ian MacDougall.

“Winnerman” also featured many extras, as scenes were shot on the school’s football field with the DHS junior varsity squad playing the athletes, and the stands needed to be full of cheering onlookers. The students were also able to get assistance from Trenton High School, which allowed the video program to have their football jerseys while filming the sports scenes.

Doelle said that outside help has made a “big difference” in not only completing the films but making them even better.