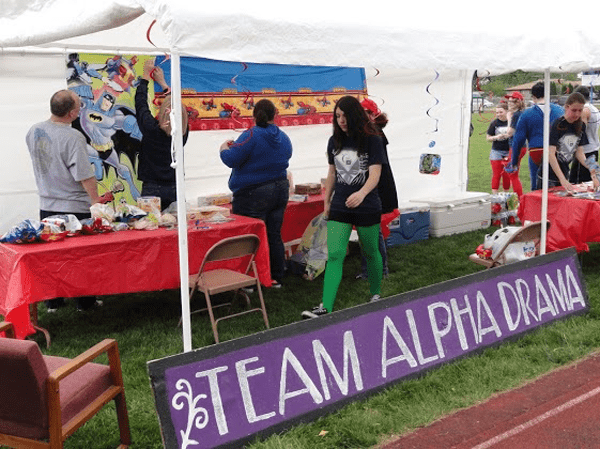 Photo courtesy of Elizabeth Samielski
Members of local Team Alpha Drama work to set up their booth at the 2012 American Cancer Society Relay for Life of Dearborn Heights at Crestwood High School. Teams set up booths along the track to have games and other activities for visitors to the event while team members walk laps on the track.

By BOB OLIVER
Times-Herald Newspapers
HEIGHTS — The countdown is on for the first steps to be taken at the American Cancer Society’s Relay for Life Dearborn Heights event, which will be held from 10 a.m. May 11 to 10 a.m. May 12 at Crestwood High School, 15801 N. Beech Day.

The annual event raises money and awareness in the fight against cancer.

“The 100th anniversary of the ACS is May 22,” said Elizabeth Sawielski, ACS senior community representative. “We are hoping that we can put them out of business by winning the battle against cancer.”

This year there are 17 teams with more 230 participants signed up for the event. Together, they have raised more $5,200 for the ACS.

Games and entertainment are scheduled throughout the 24-hour period. Sawielski said that team sponsored games will include putt-putt golf and disc tossing.

“It’s going to be a lot of fun and there will be things going on all the time,” Sawielski said. “We really hope everyone can come out to the event and learn more about the fight against cancer, even if it’s just for an hour.”

This is the ninth Relay for Life in Dearborn heights and the second at Crestwood High School.