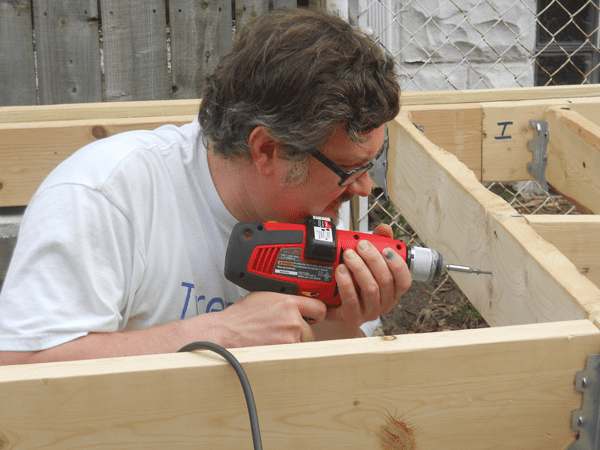 Parade returns May 19
Photo by Denette Watson
Chris Dardzinski works on his parade float, “The City of Lincoln Park” float. The float, with a “Fallen Soldiers” theme,” will feature military gear, equipment and flags.

By DENETTE WATSON
Sunday Times Newspapers
LINCOLN PARK — The Memorial Day parade is scheduled to return to Lincoln Park after a six-year absence. Prior to its hiatus, the parade was considered the second largest to Wyandotte’s Downriver.

The parade will step off at 10 a.m. May 19 The main route will be northbound Fort Street from White to Merrill streets with staging on White and Park. An honor guard and military ceremonies will immediately follow the parade.

The city has not had a Memorial Day parade since 2007 due to a lack of funding, but it once again will honor patriotism in Lincoln Park because of Chris Dardzinski and dozens of sponsors and volunteers.

Dardzinski 45, a Lincoln Park resident and president of the city’s farmers market, shared his interest with becoming involved with the revitalization of the parade with Mayor Patricia Diaz Kraus in August. The parade was in need of a chairman and no one had yet to volunteer.

For Dardzinski, the parade establishes Lincoln Park as more than just a city, but as a community as well.

“It doesn’t matter how broke a city is, you’ve got to have a parade,” Dardzinski said. “If we have nothing going on, then we’re just six square miles of a city. Anything can be a city. If you want to be a community, then you have to have things going on.”

The spirit of community has come to life over the last 10 months. All money to support the parade has come from individual contributions. Through fundraisers, sponsors and volunteers, about $3,500 in cash and $1,800 in materials have been have raised for the parade.

The support of sponsors and volunteers has been invaluable to the efforts put toward re-establishing the parade, Dardzinski said. It has been a real community effort.

“The mayor has been involved since day one,” Dardzinski said. “Everyone involved has been tremendous.”

In addition to his role as chairman, Dardzinski has been busy building “The City of Lincoln Park” float. He said building a float is on his bucket list and this gave him the opportunity to make something special and unique for the city.

Dardzinski said his level of involvement stems from the respect and admiration he has for the people who serve in the military. He understands the sacrifice because four of his uncles served in World War II.

“Patriotism means a great deal to me, and I want Lincoln Park to remember all our fallen heroes,” Dardzinski said. “Fallen soldiers are why we are here. Anyone who puts on a uniform is a hero.”

For this parade the measurement of success will be the turnout and how much fun the participants and spectators
have. Dardzinski hopes to see at least 5,000 people on the parade route. He has committed to a three-year commitment as chairman and his hopes for the future are to make it bigger and to one day see 20,000 people line Fort Street.

“I want to see it become a fluid thing again,” he said, “to become a new old-time tradition.”