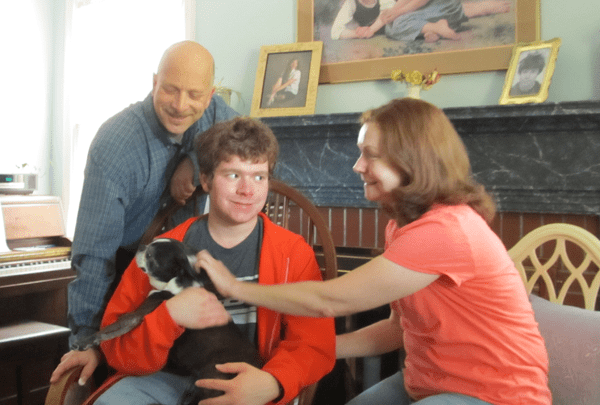 Photo by Sue Suchyta
Anthony Cieri (second from left), 20, who is autistic, spends a moment with his father, Ron Cieri (left), his mother, Lisa Cieri, and Olive, the family’s Boston terrier. He is scheduled to graduate June 13 from Dearborn High School and begin classes in the fall at the University of Michigan-Dearborn.

By SUE SUCHYTA
Times-Herald Newspapers
DEARBORN – For someone who only spoke three original, self-initiated sentences not mimicked from TV when he was 5 years old, Anthony Cieri, 20, now has a lot to say.

Cieri, who plans to graduate June 13 from Dearborn High School and start classes at the University of Michigan-Dearborn in the fall, said he sometimes forgets that he has autism, a neural development disorder marked by impaired social interaction and communication.

He said he appreciates it, though, when his classmates are patient with him when he says something wrong or makes a social mistake.

“I’ve smoothed out over the past several years, but I can stumble,” Cieri said. “Even my family points it out.”

When Cieri was 19 months old, he had a few words in his vocabulary, but his mother noticed he started becoming easily agitated, and he stopped learning new words. By the time he was 3, his parents knew he had signs of developmental disorders.

They discovered he was hyperlexic, an autistic disorder, and was reading and decoding words without any training before age 5, but without understanding their meaning. She explained that hyperlexics, despite their decoding ability, have trouble with speech.

“He was reading things but he didn’t know what they meant,” Lisa Ciera, his mother, said. “If we were driving down the street and he’d be in his car seat, he’d look out the window and say ‘doughnut’ when we were passing a doughnut shop.

“I thought he was talking about the picture, so we would pull in. I wanted to get him to talk, because he was not really talking very much. I would get him a doughnut and put it in front of him, and say ‘What’s that, Anthony?’ but he wouldn’t say a word.”

Lisa Cieri said Anthony would watch children’s shows, like “Thomas the Tank Engine” videos, and would echo the show’s words with the same inflection and enthusiasm, but he would not deviate from the script.

She said when he was 3, a neurologist diagnosed Anthony as having pervasive development disorder, and eventually as autistic, and they enrolled him in speech and sensory integration therapy as a preschooler.

He attended the primary preschool impaired program and the sensory integration program for three years for half a day at Nowlin Elementary School, then went to Cherry Hill United Presbyterian Cooperative Preschool for the rest of the day, with the goal of getting him six hours of intervention a day.

He also saw a private speech therapist two days a week in Plymouth.

When he was 5 he initiated three sentences on his own, which his mother said was a “huge breakthrough.” She said after that breakthrough, he slowly began to pick up verbal skills.

He continued to be primarily homeschooled until he was 13 when his parents discovered that Burger School in Garden City had a program for high-functioning autistic children.

When Cieri was 14 and 15, he took science and band classes at Bryant Middle School before transitioning part time to DHS five years ago.

Cieri said the move to DHS was both exciting and scary because noises create frustrating interference for him.

He said one of the biggest challenges he faces as a mainstreamed student in a traditional school setting is dealing with what he calls “loud, obnoxious classmates” because he has difficulty filtering out the noise so he can focus on the classroom lecture.

His mother explains that he hears things like someone with a hearing aid who cannot turn the volume down, and foreground and background noises sound very similar, so it is hard for him to separate the two.

“It is difficult when someone (a student) is talking and the teacher is talking,” Lisa Cieri said. “That is why he gets so frustrated.”

At DHS, he started with biology, woodshop and band classes. As a percussionist, he participates in marching band at DHS playing a bass drums, which he said he enjoys.

“It’s a lot of effort but the kids are great, and seeing it all come together on the night of the football games is just awesome,” Cieri said.

He joined the DHS theater program as another extracurricular activity, and performed in school musicals the last five years. This spring he was double-cast in the role of LaFou, Gaston’s sidekick in “Beauty in the Beast.”

He took classes for five years (instead of the traditional four) at DHS because some of his Burger credits did not transfer, and he would have had to forgo band and other elective classes he found enjoyable at DHS to earn enough applicable credits to become eligible for a diploma in four years.

Cieri likes biology, and when he attends UM-D, he said he would like to aim for a career that provides a balance between lab work and working with people.

“As much as I would love private time in the lab, I don’t want to work all alone for the rest of my life,” Cieri said. “I like to communicate with people even though I’m kind of sketchy in some areas. From what I can tell people know that I am well-meaning as long as I don’t get too frustrated or angry.”

Lisa Cieri stresses the importance of setting goals when raising a child with special needs. When her son was 4, their goal was for him to develop functional speaking skills. She said she never pictured how far he has come to date.

“The sky’s the limit,” she said. “My advice for any mom in this situation is you set reasonable goals, goals that you know you can acquire and that you can pinpoint, that you can say, ‘We got here,’ so that you don’t feel so overwhelmed because you can feel very, very beaten down.”

Ron Cieri, Anthony’s father, is proud of how much his son has overcome and how he does not give up.

“I think he is a hero in the fact that he’s come this far because I think people do not understand the level of stress and anxiety that he’s faced since such an early age,” he said, “and the fact that he is has been able to keep going after falling down so many times.

“Life doesn’t get hard until you really experience a child with an emotional, medical or neurological disability,” he said. “Then you really understand what it’s like to shoulder an important burden or to make an important impact on your child’s life. Everything else is easier in comparison.”