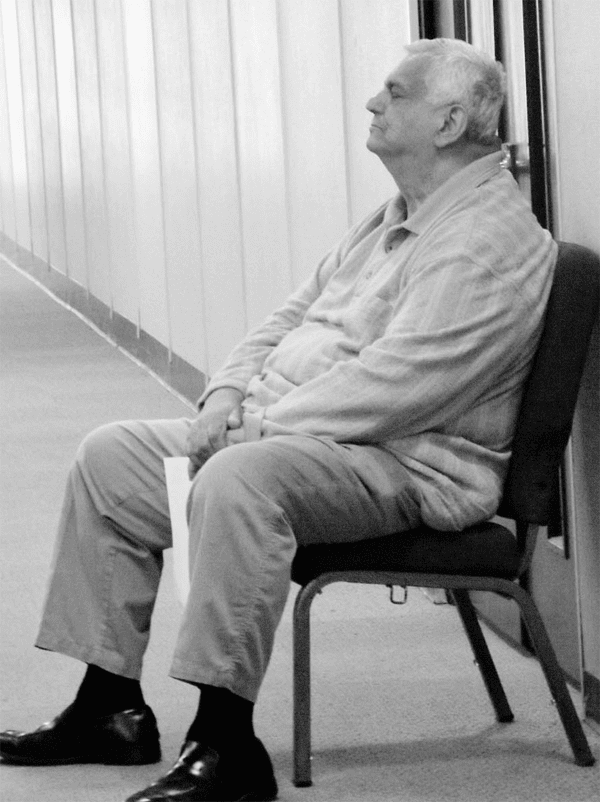 Photo by Gabriel Goodwin
Councilman Angelo DeGuilio waits for the Board of Ethics to reconvene from closed session May 20. The board scheduled an open hearing at 2 p.m. July 30.

By GABRIEL GOODWIN
Sunday Times Newspapers
ALLEN PARK — The Allen Park Board of Ethics met Monday and agreed to investigate further into the complaints made against Councilman Angelo DeGiulio.

After discussions in a mostly closed session, the board said it will move forward in review of complaints made about DeGiulio’s “disparaging and discouraging remarks” toward an Allen Park police
officer on two separate occasions and consider if there were any ethical principles violated. Since DeGiulio dropped his lawsuit against Officer Wayne Albright, the board can begin investigation into the complaints.

The board announced an open hearing will held at 2 p.m. July 30 to address the complaints in further detail.

“This is a serious matter and we would like to hear further testimony from all parties involved in the complaint before
we come to any conclusion,” Interim City Administrator David Boomer said.

Another ethics complaint is still pending due to an ongoing lawsuit between DeGiulio and the filer of the complaint.

DeGiulio said he has no plans to drop the lawsuit.

DeGiulio said at the ethics meeting he would present scholarships to Allen Park High School seniors at the Board of Education meeting that evening.

He said he approached the Allen Park Public Schools Board of Education with the idea of scholarships and proposed the money come directly from his own pocket. The scholarships totaled $2,100 and was given out to nine students.

He originally offered three $500 scholarships to students, but because of the low number of applicants, DeGiulio said he would expand the scholarship to include six more students from the high school. These additional six students would receive $100 each.

“Only nine students applied,” DeGiulio said. “I wanted to make sure everyone who applied received something.”

DeGiulio explained he wanted to offer money to students interested in pursuing careers in education, law enforcement, or metallurgy in honor of his father, father in-law, sister, and brother in-law.

These students are pursuing degrees in education.