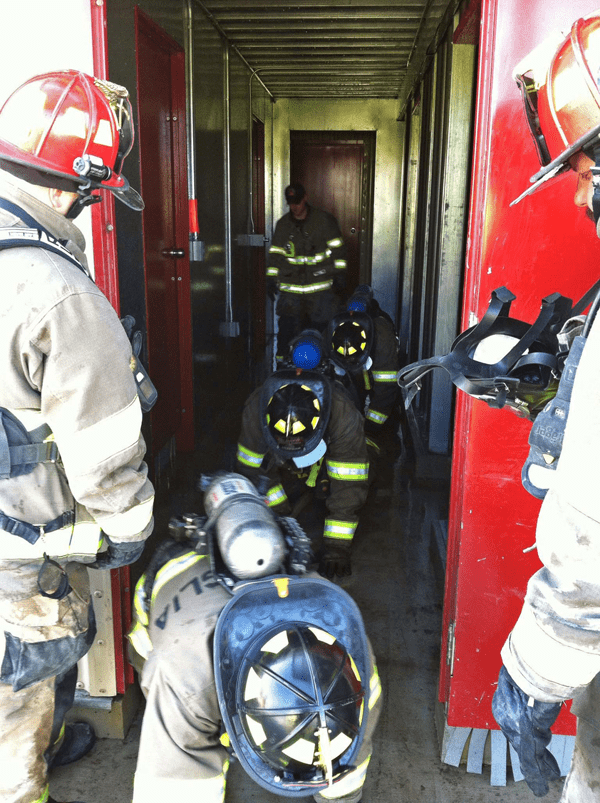 Photos courtesy of the Dearborn Heights Fire Department
With their vision blocked with wax paper on their masks, firefighters (left) perform a rapid retreat from a building, maintaining contact with each other so no one is left behind. A procedure such as this is used in case of a roof or floor collapse, or any other situation that renders the building a danger to the firefighters while they are inside.

HEIGHTS — Firefighters recently participated in a specialized course designed to help ensure their own safety while fighting fires.

Hosted at the Schoolcraft College Fire Training Center in Livonia, the Fireground Survival course enables firefighters to recognize the types of events encountered in the course of fighting fires that contribute to their disorientation or entrapment – and how to take the necessary steps to perform rescue techniques (for themselves and their fellow firefighters) if disoriented, separated, or need to exit a structure in an emergency situation.

“Structure fires are unpredictable” Deputy Fire Chief Russ McNamee said. First, firefighters may be entering a structure they have never been in before – so they don’t have a good idea of where things like where the stairways, hallways, doorways and windows are located.

“Another big factor is visibility. Thanks to Hollywood, most people have the impression that firefighters enjoy a crystal-clear vision of the fire they are attacking inside a building. That’s simply not the case. In a structure fire, there is typically zero visibility due to the smoke. In other words, try putting a brown paper sack over your head. That’s pretty close to the visibility a firefighter has inside a burning building. It’s pretty easy to get disoriented when you are in an environment like that”

“We obviously don’t plan on getting disoriented, hurt or trapped when we’re fighting a structure fire.” McNamee said, “but they’re unpredictable, volatile and ruthless. The one consistent thing is, they typically won’t go according to your plans.

“Everything a firefighter knows about a fire before entering a burning building can change within just a few minutes once they’re inside. It’s an environment where even highly-seasoned firefighters can get overwhelmed. This training helps our firefighters better understand what they need to know to better avoid these hazards, as well as learning new practices on ways to efficiently escape structures when every second counts.” 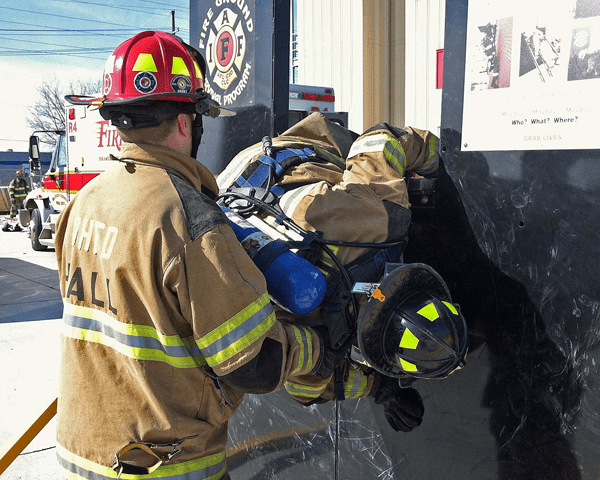 A firefighter learns to hang from a window frame to minimize surface area that will be burned until a ladder reaches the window. Firefighters may do this if a room environment becomes too bad and they have no other option.