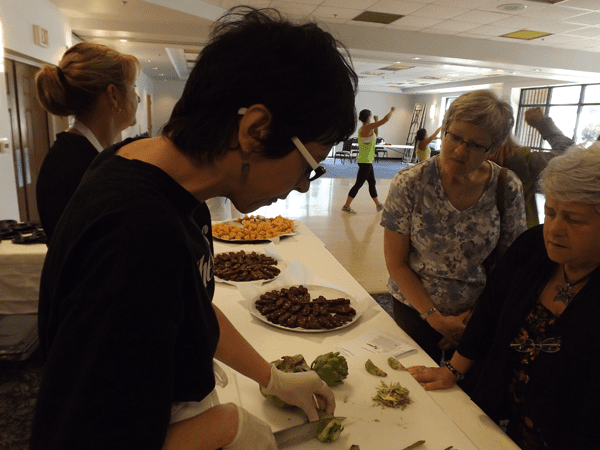 Photo by Gabriel Goodwin
Isabella Nicoletti, personal chef to Florine Mark, demonstrates how to cut artichokes and use the most out of the vegetable during a celebration May 22 for the city of Melvindale’s success in a Weight Watchers weight loss competition.

By GABRIEL GOODWIN
Sunday Times Newspapers
MELVINDALE — The city celebrated no more junk in the trunk Wednesday as a result of cumulative weight loss during a recent six-week competition in southeast Michigan.

Laurie Humphrey, media relations specialist from Weight Watchers, said the organization was there to celebrate a team that lost about 8 percent of their body weight. She said to put their accomplishment in perspective: The average weight loss for the 36 teams participating was about 3.5 percent.

“You guys really rocked this competition,” Humphrey said. “And, we really wanted to congratulate you for that.”

Two of Melvindale’s five teams — No Mo Junk in Da Trunk and Sink or Slim — finished first and second, respectively.

The celebration at the Melvindale Civic Arena featured fitness instructors from a company based in Dearborn that offer classes in the Downriver area and cooking demonstrations by Isabella Nicoletti, personal chef for WW Group President and CEO Florine Mark.

Due to unforeseen events, neither Mark nor Mayor Stacy Striz could attend the event but wished the city well. Weight Watchers gave a grant to Melvindale for its efforts in promoting healthy living. The official presentation of the grant will be at a future city council meeting so Mark and Striz can be present.

Humphrey said the company was encouraged by the ways the city took the responsibility to raise awareness and participation by providing the opportunity for residents to gather and swap healthy recipes and exercise in a community setting while “getting people to think about what they are eating.”

“We want people to break out of the old habit related to junk food by getting people to think ahead,” Humphrey said. “Replacing chips and other snacks with fruits and vegetables is a way to start.”