Illustration courtesy of MJC Construction Management Inc.
Negotiations have begun for redevelopment of the former Wyandotte City Hall site. A four-story structure has been proposed.

The city will enter into a 90-day exclusive negotiation period with MJC Construction Management Inc., a development company from Macomb Township, to discuss the proposed replacement of the vacant building.

MJC proposed a four-story, modern-style building that will feature an underground parking garage, first-floor commercial space, second- and third-story lofts, and penthouses on the top level.

In its proposal, MJC representatives said the project is an opportunity “to re-develop the functionally obsolete municipal
building and create a viable downtown community
living environment.”

City Engineer Mark Kowalewski said he plans to have funding secured for the project before the negotiation period ends. He is pursuing funding from the Michigan State Housing Development Authority and the Neighborhood Stabilization Program 2.

Kowalewski said a market study would be a requirement for almost any MSHDA grant and MJC representatives volunteered to conduct the market study, with no cost to the city, to determine the need for housing in downtown Wyandotte.

Kowalewski estimated the study should not take more than two months to complete and assured the council that the Aug. 20 deadline is more than enough time to complete the necessary steps to move forward with the proposal.

He said he would like to see two things happen during this initial stage: Determine the finances for the proposal and determine
whether or not there is a market for this kind of development, although identifying the finances “is the most important factor before moving forward.”

During open discussion on the project, council asked Kowalewski to encourage design changes to include a potential reorientation
so the building can cross Biddle Ave and potentially offer a rooftop patio or garden area due to the lack of outdoor community space or backyards. He said these concerns will be brought up in future negotiations. 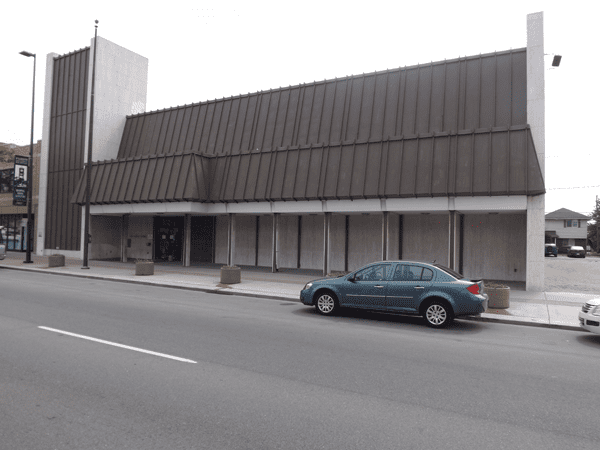 Photo by Gabriel Goodwin
Proposed reconstruction of the former Wyandotte City Hall site at 3131 Biddle Ave. could be finished by 2015.