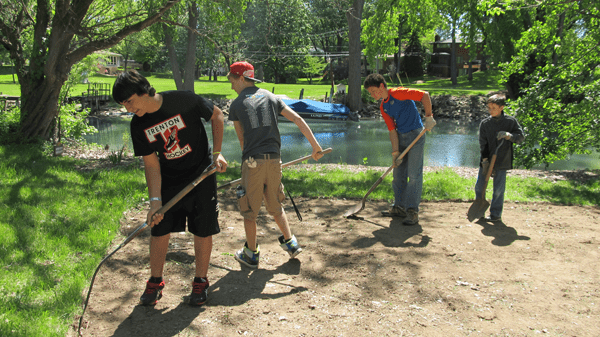 “There are no butterfly meadows on Grosse Ile, so it will be the first one,” Moskall said. “And I’m great with working outside, so I thought this one was for me.”

GINLC provided a $1,000 grant for project materials and plants, while Scouts, friends, family and conservancy members
volunteered their time to create the habitat on land donated by Josef and Ursula Kobiljak.

“We’re all here to help him do this thing, but a big part of an Eagle project is the undertaking and being in charge and seeing
it through,” said John Moskall, Jagr’s father and an assistant Scoutmaster.

John Moskall said Eagle projects, by design, teach Scouts leadership and organizational skills, and conservancy members are glad to have someone take on a project that will beautify their property. He said he appreciated that GINLC members volunteered their own time to help his son achieve Scouting’s highest rank.

Other expertise, supplied by a Trenton landscape supply business, helped him choose the right project supplies, Jagr Moskal said, and he bought native nesting and nectar-supplying plants at a Grosse Ile nursery based on their recommendations as well.

Jagr Moskall said he hopes area residents will enjoy the beauty of the butterfly habitat, which provides a vital nesting and nectar site for different species.

Since the butterfly meadow is on conservancy land, it is open to the public for their enjoyment, John Moskall said.

Mickey Bartlett of Grosse Ile, a GINLC volunteer, said meadows like this, which provide nesting and nectar source for butterflies, are becoming increasing scarce in suburban areas. She said without the restoration of milkweed and nectar-providing wild flowers
butterfly populations will decline.

Before planting butterfly-friendly plants, volunteers broke up sod on the property May 25 near an adjacent canal — to make watering easier — after which they added additional topsoil. The next day they added native plants attractive to butterflies for nesting and nectar. The volunteers then fenced in the area to keep rabbits from eating the plants.

Jagr Moskall said the placement of the plants is important, so taller plants do not overshadow plants growing closer to the ground.
John Moskall said the GINLC wanted native, non-invasive plants. He said they also selected a mix of sun and shade plants.

Bartlett said many of them look like wild flowers.

“There was a lot of thought and planning behind what plants and where to plant them,” John Moskall said. “They’ve also had a lot of conservancy volunteers that have donated plants for Jagr’s project.”

He said they chose starter plants over seeds this spring on the advice of conservancy members because they would not be able to water seedling plants every day, and because weather conditions caused them to break the sod for the garden later than anticipated. They hope to plant some seeds in the fall and see how effectively they fill in the meadow next spring.

John Moskall said the conservancy hopes Scouts will continue to volunteer at the site and eventually fill the meadow with butterfly-
friendly plants.

Jagr Moskal said he learned that other butterfly attractions include stones to soak up the sun, which provide butterflies with a warm place to bask, since if the temperature is well below 86 degrees Fahrenheit they are unable to fly.

John Moskall said they have learned a lot from the project.

“I didn’t know that you needed host plants and flowered plants to sustain it,” he said. “The host plants are where the butterflies reproduce, and they hide in the plants; and the nectar from the flowers is what they feed on, so it’s kind of self-sustaining.”

While working on the butterfly habitat, Boy Scout Matthew Graver, 11, of Grosse Ile learned the role of butterflies, and the contribution they make by pollinating plants. He said his experience
has him thinking about eventually choosing an outdoor Eagle project.
Bartlett praised Jagr Moskall’s planning and work.

His father is also proud of him.

“Jagr loves the Boy Scouts and everything about them,” John Moskall said. At 14, “he’s already in the midst of starting an Eagle project, so I’m very proud that he’s tackling this early before he gets in high school and all of the extra activities. He’s growing up fast and I’m proud of him.”

For more information about the project, to help or to donate native, non-invasive plants, contact Jagr Moskall at [email protected]