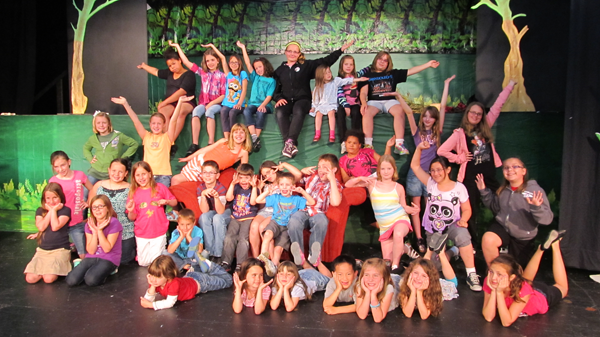 Photo by Sue Suchyta
The Downriver Actors Guild Youth Theater presents the Disney musical “The Jungle Book” at 7:30 p.m. June 7 and 8, and 3 p.m. June 9 at Out of the Box Theater, 1165 Ford Ave. in Wyandotte. Tickets are $10 and are available by calling 313-303-5269 or online at www.downriveractorsguild.net.

By SUE SUCHYTA
“Grease” is the word at the Downriver Actors Guild as two dozen cast members began vocal rehearsals last week for the musical set in the fabulous ’50s.

Tickets are $15 for adults and $12 for students and seniors. The theater is at 1165 Ford Ave in Wyandotte.

The cast includes Amanda Aue of Taylor as Sandy Dumbrowski, and the Pink Ladies played by Alexa Mertz of Browntown Township as Marty, Kayla Aue of Gibraltar as Betty Rizzo, Jami Mullins of Trenton as Jan and Katie Suchyta of Dearborn as Frenchy.

The T-Birds include Michael Suchyta of Dearborn as Danny Zuko, Craig Carrico of Detroit as Kenickie, Kenny Konaszewski of Dearborn as Roger, Jacob Partrich of Taylor as Sonny and Connor Garcia of Southgate as Doody.

Men in the ensemble include Jacob Bowlby and Noah Bias of Wyandotte, Alex Rosen of Lincoln Park, Jimmy King and Mitchell Sturm of Taylor, and Thomas Huffmaster of Trenton.

Aue said “Grease” was one of the first shows she directed 10 years ago, with Dione Carrico, when they launched the Taylor Youth Theater, which evolved into the Downriver Actors Guild.

Aue said she always wanted to be in “Grease,” but started in community theater when she was in her 30s.

She said several cast members who were in the teen production of the show 10 years ago are in the current cast. Craig Caricco played Eugene when he was 12 years old. Her daughters Amanda and Kayla were extra Pink Ladies in the ensemble in their first production of “Grease.”

Aue said the show has some mature content, and she would not recommend it for young children.

“You have high school kids who are possibly pregnant, and different things that are happening in the show,” Aue said. “It’s definitely mature content, even if you take the language out of ‘Greased Lightning,’ and that’s really the only song that had any language in it that could be offensive.”

“Grease” staging will be in a “black box” style, Aue said, so it will be lit very creatively, and the set pieces will be much smaller than what patrons are accustomed to seeing. She said they plan to be creative with pieces that can be used different ways.

“We are looking for a more modern feel with the music, a little bit more rock ’n’ roll, although it will maintain the integrity of the ’50s feel,” Aue said, “a little bit closer to the revival.

“We have a couple of ideas up our sleeves.”

She said the additional rock ’n’ roll music has a much faster upbeat. “Summer Nights,” for example, will have a quicker tempo.

She said the upbeat tempo makes the choreography more challenging as well.

“Summer Nights,” and “We Go Together” are usually audience favorites, and Aue said the group paid additional royalty fees to include the “Grease” movie songs not in the original stage play, including “Grease is the Word,” and “Sandy,” which Danny sings at the drive-in, and they will finish with the song, “You’re the One that I Want.” She said “Hopelessly Devoted to You” will be included as well.

The opening scene with the Rydell High School fight song is gone, Aue said, adding that it goes right from the opening scene into the lunchroom scene where “Summer Nights” comes into play.

Aue said that this is the first time her daughters play leading roles side by side. She said she anticipated getting some flak once word got out that her daughters were in lead roles, but she reiterated that she had five highly respected directors from Downriver on her casting committee, and she was probably a tougher critic of her daughters’ auditions than any of the others.

“I was the one saying, ‘Are you sure, are you sure?’” Aue said. “But everybody agreed, and we did what (we felt) was best for the show overall.”

Amanda Aue is playing her first lead in an adult production, and is ecstatic, her mother said. She added that it is also the first time the sisters have played adversarial roles opposite each other on stage.

“To play opposite one another, the tension will definitely be there,” Aue said.

She added that she is very excited to have so much talent in the cast from the area.

“The new talent that is in this cast, I am ecstatic over,” Aue said. “I just can’t wait to get started. These young adults are just so talented, I get goose bumps whenever I think about it.

“My vision is coming to life on stage,” Aue said. “Getting my tech crew involved and then just adding their talent, this is going to be one show you are not going to want to miss.”