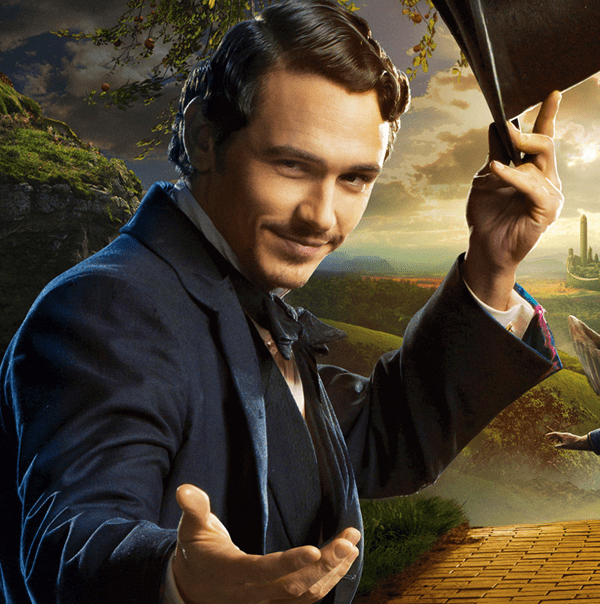 James Franco in “Oz the Great and Powerful”

PICKS OF THE WEEK
“Oz the Great and Powerful” (PG) — Years before Dorothy and Toto landed over the rainbow, another Kansas yokel went on an adventure down the yellow brick road. Oscar Diggs (James Franco) is a small-time magician and part-time con man who hatches a silly scheme to attain greatness. He winds up in a colorful world where he befriends a flying monkey (voiced by Zach Braff) and meets three charming witches (Rachel Weisz, Michelle Williams, Mila Kunis).

Of course it’s not going to measure up to the original. I’ll get that out of the way first. There’s no music, for one. James Franco acts like he’s not supposed to carry the movie. Franco can give a real performance, but the guy isn’t convincing when he’s talking to computer-generated critters.

“Snitch” (PG-13) — When Jason (Rafi Gavron) is busted for receiving a shipment of ecstasy, the teenager faces a mandatory minimum sentence of 10 years. Fortunately, his father, John (Dwayne “The Rock” Johnson), is an enormous and caring fellow. To make a deal to get his son out of trouble, John volunteers to go undercover and to take down a drug ring. It’s a distressed-dad action flick with an overt message about the War on Drugs: It’s bad. Johnson puts in the effort, and you can see his skill here. He’s still a miscast — an action-hero type charged with playing an everyman — but it’s an entertaining rental and somewhat unique for an action flick of its class.

“Wrong” (R) — Do not expect this movie to make sense … at all. It’s funny. But it won’t let you enjoy it as a casual experience. In “Wrong,” a man (Jack Plotnick) searches for his lost dog. Palm trees decide to be pines, office cubicles are subject to torrential weather patterns, and people are just strange. There’s nothing really to “get” besides the idea that this movie wants to break the mold of the slice-of-life film genre. It might frustrate some viewers. Scratching your head and going along with the absurdity on screen is the best-case scenario for such an out-there flick.

DOG OF THE WEEK
“Hansel & Gretel: Witch Hunters” (R) — Hollywood seems to be under the impression that you can take any fairy tale, make it sexy and action-packed, and there you have a recipe for box-office success. That is, unless the execution is dim and boring. In this pointless exercise, Hansel and Gretel (Jeremy Renner and Gemma Arterton) grow into vigilante witch hunters. Somehow, they discovered the secret to building shotguns, automatic weapons and stale one-liners well before the technology existed. If only cool props, costumes and sets could make a movie good. Too bad for this flick that script and performances matter a lot more.