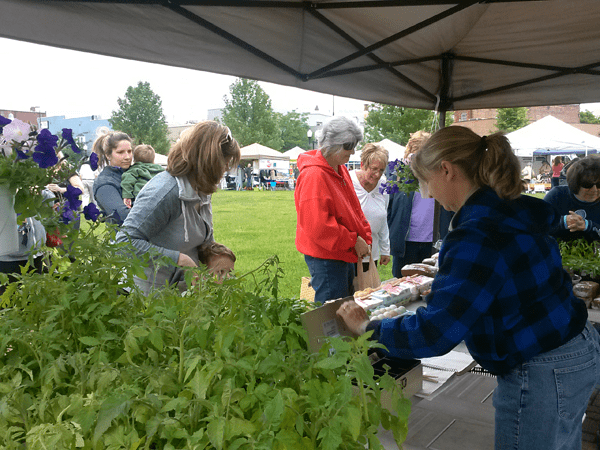 Photo by Gabriel Goodwin
Darla Bruck (right), a vendor at the Wyandotte Farmer’s Market, sells a dozen eggs from the Americana chicken to a customer and said the different chickens produce different colored eggs. The farmer’s market, at the corner of First and Elm streets, will be open every Thursday through Oct. 3 and will feature child- and adult-friendly events like arts and crafts, the Zucchini 500 race and live music.

“You could shop for complete meals here at the market,” Hirsch said. “You wouldn’t necessarily have to go to a supermarket for anything.”

The Power of Produce program is for the children visiting the market, she said, because it allows them to get $3 in free tokens to spend on produce items at vendors’ tents.

“It gives the kids a chance to fully participate in the market,” Hirsch said. “They can interact with the growers and farmers present.”

The Double-Up program allows people with bridge cards to get more bang for their buck because their money is matched with the program, she said.

The farmer’s market is available to all every Thursday rain or shine from through Oct. 3 and offers spices, fruits, vegetables, spices, lamb and even soap, she said.

Initially, she said, the initial purpose was to bring more foot traffic downtown and get people to participate with the businesses in the area.

Darla Bruck runs a booth at the farmer’s market for her brother’s farm, L.P. Stotz Farms in Ida. She sells Michigan-grown produce, free-range eggs and even seed potatoes. She also had baked goods, made from natural and pesticide-free ingredients, for sale.

Bruck said the difference between free-range eggs and those bought at a grocery store is the way the chickens are raised. The chickens are given feed that is closer to their natural diet, like bugs grass and seeds.

“The eggs produced from a free-range chicken,” she said, “are lower in cholesterol, higher in nutrients, and can last up to two months in the refrigerator.”

The newest vendor at the market was Nate Whaley, owner of Union Street Soapworks based in Grand Rapids, who said his products are probably the only thing at the market you can’t eat. The soaps were originally a high school chemistry experiment that stuck around as a hobby and finally became what he sells today, he said.

Whaley said he has 50 different all-natural varieties of soap available — from clean linen and sandalwood to bacon, beer and dirt — but had about 25 on display Thursday.

The dirt-scented soap, he said, was made on accident because he left two unrelated scents open in a room and when he returned the whole room smelled like mud. He said he panicked then realized he should just go with it.

“People usually get it as a joke for someone,” he said. “It definitely has a cult following, but also has a practical application in the kitchen. Because of the coffee base, it will absorb strong odors like onions and fish.”

The soaps are good alternatives to factory-made soaps, he said, and a lot of the scents were requested by customers.

“I wanted to pick scents that have a therapeutic value rather than just the smell-good stuff,” Whaley said. “I do have soaps that smell good, but I have other soaps that have real aromatherapy qualities to them.”

He said his healing bar, for instance, is made with lavender, tea tree and rosemary essential oils that provides antifungal, antiseptic, anti-inflammatory benefits.

“The market had a good reputation.” he said, in reference to why he chose Wyandotte’s farmer’s market. “I wanted to come try it out. And, I love this town.”