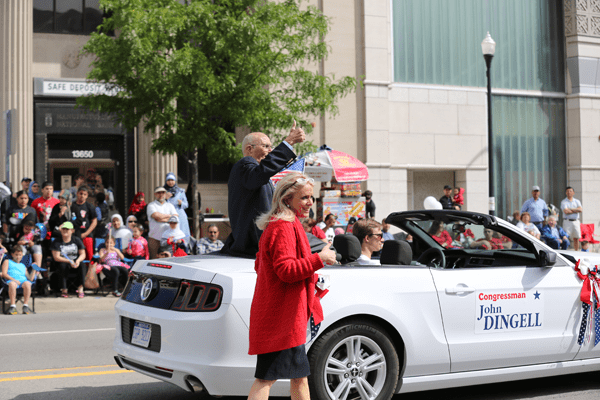 Photo by Steve Wielkopolan
U.S. Rep. John Dingell (left) and Debbie Dingell give thumbs up to the crowd at the Dearborn Memorial Day Parade last month. The congressman became the longest-serving member of Congress in U.S. history June 7, at 57 years, five months and 26 days.

By BOB OLIVER
Times-Herald Newspapers
When U.S. Rep. John Dingell (D-Dearborn) took office in 1955, Dwight D. Eisenhower was president, John F. Kennedy was a first-term senator from Massachusetts and there were only 48 states in the union.

Now the man who has witnessed so much history is being acknowledged for his own role in it.

On June 7, Dingell — who represents Dearborn, part of Dearborn Heights and much of Downriver — became the longest-serving member of Congress in U.S. history. At 57 years, five months and 26 days, he passed the previous mark set by Senator Robert Byrd (D-W. Va.).

He was already the longest-serving member of the House, a feat he attained in February 2009.

The accomplishment was celebrated both in Michigan and in Washington, D.C., by government officials on both sides of the aisle.

President Barack Obama said in a statement that “John has always worked tirelessly for people of his beloved Michigan and for working families across America.”

“He has helped pass some of the most important laws of the last half-century, from Medicare to the Civil Rights Act to the Clean Air Act to the Affordable Care Act, and he continues to fight for workers’ rights, access to affordable healthcare, and the preservation of our environment for future generations to enjoy,” Obama said.

Obama is the 11th president that Dingell has served under.

Sen. Carl Levin (D-Mich) also commented that people all over the country have benefitted from Dingell’s work.

“If you are a senior who depends on Medicare, a worker who punches a clock, or an American who wants clean air, water and land, you are a beneficiary of John’s extraordinary legislative legacy.”

Gov. Rick Snyder said Dingell “has been a champion for Michigan and its people,” and that he “had worked tirelessly to advance the interests of our state and all Michiganders.”

Despite all of the praise, Dingell told an audience at an event in his honor the day he eclipsed the record that being humble was a key part of the job.

“I have an important job, but I’m not an important man, which is different,” Dingell said. “And you’ve got to keep that in mind. Those who forget that difference, they don’t last.”

Dingell took office on December 13, 1555, following a special election for the seat representing the 15th District of Michigan. The seat had formerly been held by Dingell’s father, John D. Dingell Sr., who represented the district from 1933 until his death in 1955.

Since then he has been re-elected 29 times, the last in the November 2012 elections where he won the seat representing Michigan’s 12th District.

In more than 57 years in the Congress, all of them in the House of Representatives, Dingell has gone from the “Baby of the House” from 1955 to 1959, to “Dean of the House,” which he has been since 1995. He has been involved with landmark legislation such as the Civil Rights Act of 1964 and the National Environmental Policy Act of 1970 as well as working to protect Medicare and Social Security. 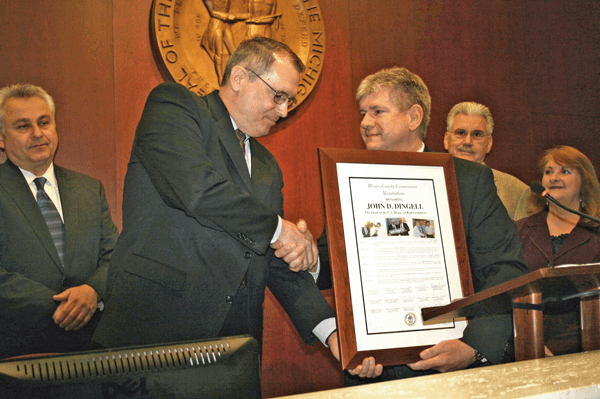 Photo courtesy of the Wayne County Commission
Wayne County Circuit Judge Christopher Dingell (left) accepts from Wayne County Commission Chairman Gary Woronchak a special resolution saluting the judge’s father, U.S. Rep. John D. Dingell (D-12th District), for reaching the milestone on June 7 of being the longest serving member of the U.S. Congress in history. On that date, Dingell had served in the U.S. House for 57 years, five months and 26 days, surpassing the record of the late Sen. Robert Byrd of West Virginia. Woronhcak (D-13th District) was joined for the presentation by other Wayne County commissioners who represent communities in Dingell’s congressional district, including Joseph Palamara (D-15th District, left, Raymond Basham (D-14th District) and Ilona Varga (D-4th District). The resolution was specially mounted, included photographs and was signed by all 15 members of the Wayne County Commission. It detailed Dingell’s contributions and service to Wayne County over the years.