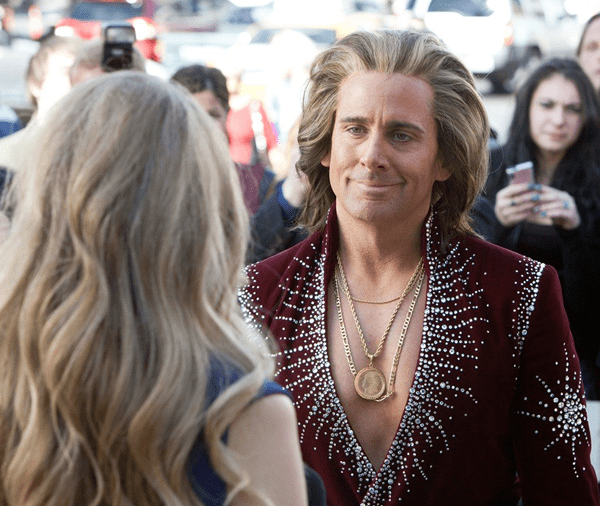 PICKS OF THE WEEK
“The Incredible Burt Wonderstone” (PG-13) — Steve Carell dives into the titular Burt — a Las Vegas magician as flamboyant as he is arrogant. Spray-tans, glittery outfits, fake teeth and pretentious talk are all part of the persona. Burt starts having trouble selling tickets, and his friendship with his partner, Anton (Steve Buscemi), starts to deteriorate. Younger, edgier magicians like Steve Gray (Jim Carrey, unleashed as a parody of David Blaine and Chris Angel) are stealing the spotlight.

Don’t expect to be too dazzled. There are plenty of gags and giggles, plus the fun of seeing funny people playing funny characters. However, it’s not for everyone. It pushes the edges of PG-13. And the story is as predictable as a card trick.

“The Call” (R) — Halle Berry plays a Los Angeles 911 operator who is pulled into an unbelievable plot. A young girl (Abigail Breslin) has been abducted by a maniac Berry has dealt with before (Michael Eklund.) The movie has the look of a slick thriller, talent and commitment from the performers, and a race-against-time story — and somehow it all just falls apart.

It’s a wonderful balance of fun and awful. It’s fun because of the scares that will make you jump in your seat. It’s awful because the movie is 30 minutes too long and uses up every suspense cliche in the box. It’s a heart-pounding ride through a ridiculous world where people start running intently — in no particular direction — at any hint of tension.

“No” (R) — It’s Chile, 1988, and a young advertising whiz is called upon to bring down a brutal ruler — with a catchy jingle. With violence in the streets and intense abuse of power on the rise, President Augosto Pinochet agreed to a vote; if a majority of Chile’s citizens vote “Yes,” he stays in power. If enough people vote “No,” then the country will have democratic elections. Rene Saavedra (Gael Garcia Bernal) has to make “No” sound appealing and hopeful. This based-on-a-true-story tale is funny, gritty, dramatic and thought-provoking. It’s a Spanish-language film, but “No” crosses the language barrier.

“Upside Down” (PG) — Two separate planets orbit each other so closely, that if you stand on high ground on one planet, you can wave to the people above as they stand on their planet. Adam (Jim Sturgess) lives on the bottom planet, a polluted impoverished dystopian nightmare. He falls in love with Eden (Kirsten Dunst), a citizen of Up Top, the high-society planet hovering just above the Adam’s slums. I had high hopes for this one: It promised to be a high-concept, visually spectacular, romantic, science-fiction thriller. That’s a hard promise to keep. The struggle of the young lovers has to wrestle with the movie’s pseudoscience and underdeveloped characters.