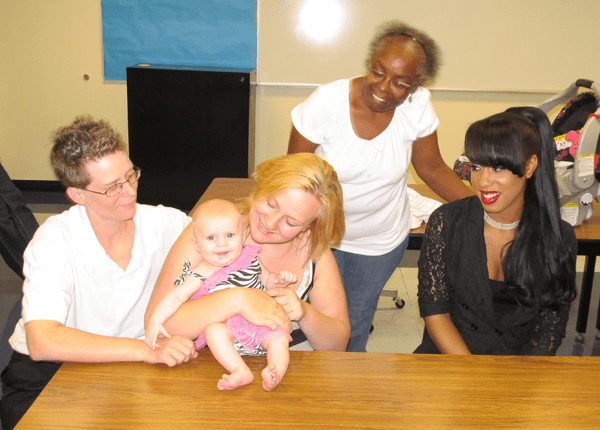 Photo by Sue Suchyta
Ashley Comer (third from left), 17, of Taylor credits the Virtual Learning Academy with enabling her to graduate from high school this year even with her pregnancy and the birth of her four-month-old daughter, Kailey (second from left). Sharee Wright (right), 17, of Taylor was also able to graduate — she from her home high school of Kennedy — after attending the VLA to escape bullying at Kennedy which she said caused her to become depressed. Patricia Scott (fourth from left), program manager for the VLA, provided personal academic support for both girls. Dawn Comer (left), Ashley’s mother, said the VLA helps pregnant and parenting teens graduate.

By SUE SUCHYTA
Times-Herald Newspapers
TAYLOR – Without the Virtual Learning Academy’s high school program and supportive staff, Ashley Comer, 17, of Taylor and mother of three-month-old Kailey, is not sure she would have graduated.

Comer said she plans to go to college to become a registered nurse.

Taylor’s Virtual Learning Academy, 9601 Westlake, which just graduated its first class earlier this month, provides students with a solid education through an alternative delivery method: the online learning academy gives students a software-loaded laptop from which they take online classes and tutorials anytime 24 hours a day, seven days a week.

While most students go to the building twice a week for a total of four hours, time on-site is not mandatory. In addition to helping students with school issues, the staff helps students work through other issues crucial to their success, like time management and personal problems.

Looking back on her first school year at TVLA, program manager Patricia Scott expressed gratitude for having an opportunity to help these students.

She said during the inaugural year the TVLA graduated 19 out of 21 possible students, and many of their graduates are going into the workforce with valuable skills, while other students are ready to go directly on to college, whether on a campus or online.

The first year of TVLA has been an eye-opening experience for both her and the students, Scott said, adding that she became emotionally committed to the project.

“Many of my children have baggage that they don’t carry necessarily in a backpack,” Scott said. “But with the help of our awesome social worker (Michelle Calvillo), we’ve been able to do the best we can at meeting their needs. The entire staff has this program at heart.”

Calvillo said that TVLA and the staff take a holistic approach to each student, taking more than education into consideration when they work with each student.

“A lot of our students are not able to focus on their education alone because they are in survival mode,” Calvillo said.

Calvillo said they address a student’s issues – including homelessness and hunger – as a staff, and approach outside community agencies for resources that could help students with their lives so they can be successful as students.

Nicole Saylor, 20, of Taylor, who graduated from TVLA, said she dropped out of school before the TVLA staff here worked with her to create a success plan with both school and her life in mind.

Saylor said the persistence and positive reinforcement of the TVLA staff made a difference in her life.

She has a six-month-old daughter, and being able to schedule her time at TVLA when she could get a sitter was an advantage.

She said she hated going to school in the past, but actually liked going to TVLA and doing her schoolwork.

Now that she is a high school graduate, she hopes to go to Henry Ford Community College to study ultrasound technology.

“It’s been a rollercoaster but I got it done,” Saylor said. “Up and down and a struggle, but I made it and I am done finally.”

A struggle with bullying and depression at Kennedy High School is what Sharee Wright, 17, of Taylor said made her interested in TVLA.

She said being at TVLA made her feel a lot better from both a mood and confidence standpoint. She said she would go twice a week and stay for hours.

She said it helped that the counselors were warm and caring.

“Sometimes you need for somebody to just care,” Wright said.

Wright said she also found the students at TVLA did not judge her. Instead, they focused on their work.

She said she would tell a potential TVLA student that staff members help students realize that they are capable of much more than they think they are.

“You should realize who you are and chase what you want to chase,” Wright said, “any dreams or anything you may have. A lot of times I thought I couldn’t do stuff – I was depressed – but everybody goes through that low point in their life, and there’s always a higher point somewhere.”

Scott said she is proud of the ownership the students at TVLA have taken in their education.

“This is the foundation they need to begin their future,” Scott said, adding that she is also proud of the number of students who have stayed and spread the word about TVLA to other students.

Adult mentor Janice Moser believes that virtual schools will begin to take the place of brick and mortar schools.

She said showing respect for students is also crucial to a maintaining a successful learning environment.

“I try to tell the kids all the time that education is the key,” Moser said. “If you don’t want to be controlled the rest of your life, get your education.”

Scott said they are helping not only this generation of students at TVLA but the next.

“These people are going to be role models soon,” Scott said, “some of them now. And if we can get them to change their mind about education, then we do not have to worry about those little people when they come into our elementary schools.”