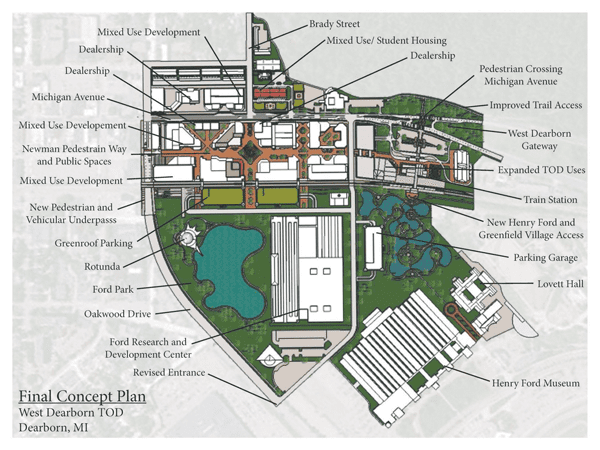 Illustration courtesy of the city of Dearborn
Design plans for the area surrounding the Intermodal Passenger Rail Station under construction in west Dearborn call for mixed use of the area immediately west of the station, more greening of the area and the potential need for more parking structures to accommodate visitors to the district.

Much of what we’re dealing with has to be put in a time frame of zero to 10, 10 to 20, or 20-plus years.’
— Warren Rauhe
MSU Associate Professor
of Landscape Architecture

By BOB OLIVER
Times-Herald Newspapers
DEARBORN — The final conceptual designs for the area surrounding the Intermodal Passenger Rail Station were presented to the public in a meeting at the Ford Community & Performing Arts Center June 20.

The rail station is set to open next year.

The designs for the district follow the fundamentals of Transit-Oriented Development, which use transportation hubs as launching point to re-invent existing areas, drive economic activity and create a unique sense of place.

Planners from Michigan State University updated the crowd of community members on any changes made to the designs since the last meeting in April.

MSU Outreach Specialist for Urban Planning Wayne Beyea said that in working to improve the place, or district, five things need to be considered and addressed.

These are that it needs to have a public gathering place, honor the heritage and history of the region and leverage the existing assets available. It also needs to strengthen the local and regional economy and generate activity and interest from the surrounding areas.

Emphasis also was made in the areas immediately surrounding the station, where the key components of pedestrian focus, managed parking, multiple transportation options and a denser mixed use of buildings and open space are to be highlighted.

In the quarter-mile surrounding the station, it is recommended that uses be diversified between retail, office, residential, convenience and commercial in addition to open space. In the half-mile radius, a mix of residential, commercial and open space is called for.

Several items also were listed as being important for further discussion for the district, including mixed use of the area immediately west of the station along Michigan Avenue, more greening of the environment and the potential need for parking structures to be built in the future to accommodate visitors to the district.

MSU is working with experts from the Michigan Municipal League and the Michigan State Housing Development Authority to assist the city staff and stakeholders in creating a plan to enhance the neighborhoods, parklands and businesses around the new train station.

The work is being funded by a grant awarded to the city from MIPlace Partnership.

Dearborn was one of five cities to receive planning and design assistance from the MIPlace Partnership.

The next steps for the proposed district are a final report including the planning and asset recommendations being given to the city and the future implementation, funding and possible partnerships to be developed in the region.

“What we’re talking about is not a do-it-tomorrow type project, though the train station is currently under construction,” MSU Associate Professor of Landscape Architecture Warren Rauhe said. “Much of what we’re dealing with has to be put in a time frame of zero to 10, 10 to 20, or 20-plus years.”

Drawings of the proposed train station are available online at the city of Dearborn website, www.cityofdearborn.org.