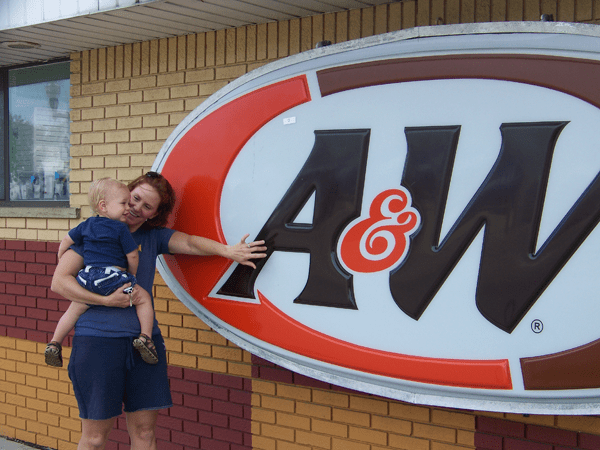 Photo by James Mitchell
Co-owner Debbie Hayes shows her 1-year-old son, Gavin, the long-standing A&W sign that will soon be replaced when she and husband, Mark, open a coffee shop at the location. The Jefferson Avenue landmark business has awaited new owners since root beer sales ended about three years ago.

By JAMES MITCHELL
Sunday Times Newspapers
TRENTON — Progress on a coffee shop to start serving up business in place of the old A&W, 2975 W. Jefferson, is taking a little longer than expected.

Co-owners Mark and Debbie Hayes know that customers have been patiently awaiting development at the location, long a part of the community makeup at the entrance to Elizabeth Park.

A summer opening “may or may not” happen, Mark Hayes said. “It’s been quite an education in how to open a brand new business.”

It’s been about three years since the root beer giant last served frosty mugs to passengers, either seated inside or awaiting service order through parking-lot speaker menus. Before reconstruction can begin, the Hayeses must first unload an assortment of fixtures, signs, kitchen equipment and — for the nostalgic-minded — outdoor menu boards equipped with microphones and speakers. Through a partnership with Detroit Metro Auction, Mark Hayes said the items will be available for potential buyer inspections from noon to 3 p.m. July 8. The online auction (www.detroitmetroauctions.com) will close at 7 p.m.

The memories of a community, Debbie Hayes said, can’t be as easily bought or replaced, and what may be called Elizabeth Perk Coffee House will salute the past as much as possible. Decoration plans include filling the walls with black-and-white photos of Trenton from days gone by, to include summer evenings when crowds lined the parking lot.

She said she had been working at the location earlier this month and overheard an older gentleman walking with a curious grandchild about his having worked in the restaurant when he was 16.

“A lot of people come through, stop and say how they used to come here,” Debbie Hayes said of the built-in customer loyalty.

Although A&W will be gone, she said the iconic roof will remain a fixture, as will the sign frame facing Jefferson.

When exactly that will be remained uncertain last week. The Hayses said they still have some details to work out with the city’s planning commission, but contractors have been hired for a parking lot overhaul, and new heating and cooling systems await installation.

Mark Hayes said he’s limited in progress until the restaurant fixtures are gone, either through the auction or other means.

Hayes, a Grosse Ile Township resident and co-owner of Dotte Pub in Wyandotte, purchased the property and building in March from Signature Associates. A previous offer of $65,000 he made in February had been turned down, and negotiations continued until an acceptable price was found. Final details of the agreement were not disclosed. Before opening plans could be made he had to deal with a once-flooded basement and other drainage issues at the site.

“We originally thought we’d be open a month ago,” Mark Hayes said last week. “That being said, it could be a while.”

Debbie Hayes said the planning has kept them busy, but they were anxious to have the details settled.