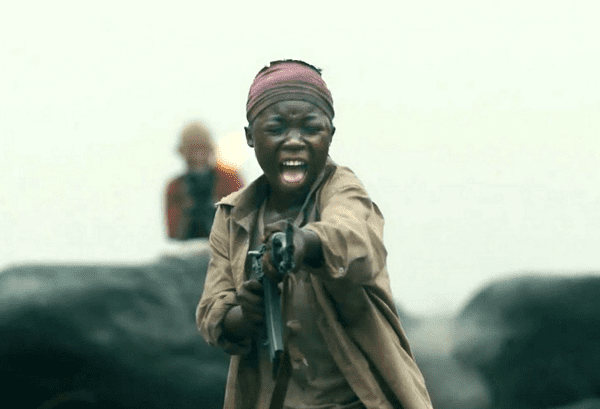 PICKS OF THE WEEK
“Star Trek: Into Darkness” (PG-13) — Captain James. T. Kirk (Chris Pines) and Spock (Zachery Quinto) are called back into action when a new threat cripples Starfleet. John Harrison (Benedict Cumberbatch) is a mysterious terrorist with an icy gaze and wicked intelligence. This installment falls right in line with the 2009 reboot piloted by J.J. Abrams — classic “Star Trek” themes infused with flashy action sequences and an attractive cast.

As the opening blast to this summer’s barrage of blockbusters, “Into Darkness” contains many exploding bits. Between the exploding bits are mushy emotional bits, as well as blustery arguing bits (Spock is still going on about that logic stuff.) Die-hard fans and cinephiles might take issue with film’s formulaic nature. Ultimately, it’s not a bad idea to go into the darkness for a few thrills.

“War Witch” (NR) — When rebels attack her village, 12-year-old Komona (Rachel Mwanza) is kidnapped and forced into the life of a child soldier. She is given a gun, and all of the other children kidnapped that day are told that their rifles are their new mothers and fathers. After Komona is left as the sole survivor of a government ambush, the rebel leaders decide she is witch, and a powerful asset to their army.

This film was shot on location in the Democratic Republic of the Congo, where writer/director Kim Nguyen did extensive research, speaking with local families and former child soldiers. The movie handles its subjects with genuine empathy and sensitivity. The lead roles are played by non-actors, who bring even more substance and reality to story. This is one of those films that will stick with you long after it’s over.

“Chasing Ice” (PG-13) — This documentary follows National Geographic photographer James Balog on his quest to gather footage of vanishing ice. The nature photographer makes trips to the far reaches of frozen climates with other naturalists and adventurers. The purpose is to set up cameras and gear to get compelling evidence proving the effects of climate change. The result is a stunning series of time-lapse footage — showing glaciers, ice flows and mountains that seemingly melt away in moments.

“Peeples” (PG-13) — Wade (Craig Robinson) wants to propose to Grace (Kerry Washington), but first he has to impress her quirky family at their wholesome home. While this is standard “Meet the Parents”-style comedy, it has two differentiating factors. First, Craig Robinson is very funny and very likable. Second, the harder this movie tries to be funny, the more it hurts. (Oh, my goodness! The family dog is humping his leg! Such laughter.) While it may have the Tyler Perry branding all around it, this film comes from writer/director Tina Gordon Chism (writer on “Drumline.”)