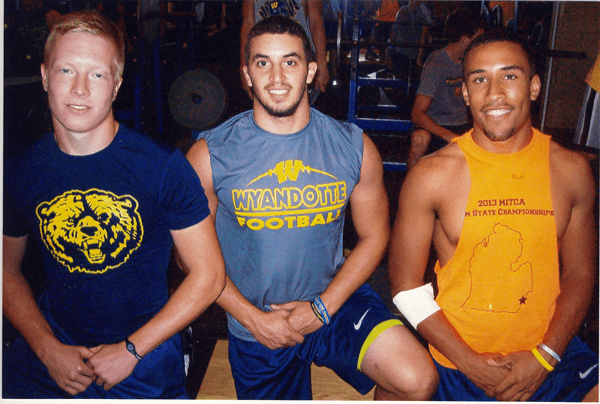 Where will Wyandotte Roosevelt wind-up at the end of the regular season of high school football?

Head Coach, Ron Adams, is optimistic that his Bears will compete for yet another grid title to add to those stacking up in the trophy showcase of the Eureka Avenue campus.

“We have to take care of business in our own league and see what happens after that.” explained Adams. “It’s always important to get off to a good start and we did that by beating Trenton in our opener.”

Roosevelt wound up 11-2 overall last season and Adams has a varsity career record of 64-16 while coaching at the Downriver League school.

A trio of captains, all seniors, are leading the way. They are Brandon Sowards, Anthony Desira and Jakob Zanski. All three are two-way players and expected to be a big part of the Roosevelt grid machine as the 2013 season moves along.

Strengths for Wyandotte include team speed, the kicking game and 27 seniors are part of the roster.

The Bears are in position to win more games than they lose. Roosevelt is away at Gibraltar Carlson on September 13th and will host Allen Park on September 20th. both games have a 7pm kickoff.