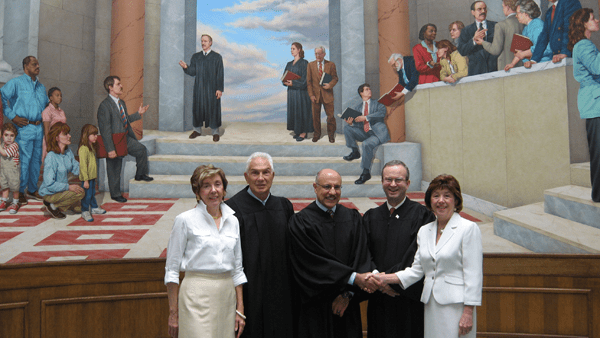 By GRETCHEN ACKERMANN
Special to the Times-Herald
Doors of the 19th District Court will swing open wide at 6 p.m., Oct. 4 for the Dearborn Symphony Opening Night Dinner at the Courthouse. Yes, Dinner at the Courthouse, dining in the rotunda with its mural “Justice is Blind” as a background featuring colorful walls of artwork depicting the history of the court of law.

The Opening Night dinner will set the stage for a grand season of listening to the award-winning Dearborn Symphony under the direction of Music Director Kypros Markou.

O’Riley is known for his National Public Radio program. “From the Top,” as well as for his critically acclaimed transcriptions of the music of Radiohead and Nirvana.

In his performance with the Dearborn Symphony, O’Riley will bring the concert to an exciting climax with Tchaikovsky’s spectacular First Piano Concert, the piece that propelled Van Cliburn to a phenomenally successful career when he won the 1958 International Tchaikovsky Competition in Moscow.

The concert begins with Offenbach’s “Orpheus in the Underworld Overture” described by Markou as “champagne” that includes the famous “Can-Can” followed by Schubert’s “Symphony No. 2” that, he said, “will make the audience dance.”

O’Riley’s long list of credits includes the winner of many prestigious awards including the Leeds, Van Cliburn, Busoni and Montreal competition, as well as an Avery Fisher Career Grant. O’Riley was a finalist at the Van Cliburn International Piano Competition in 1981.

Christopher O’Riley has appeared with the Los Angeles Philharmonic at the Hollywood Bowl, the Minnesota Orchestra, and the symphonies of Pittsburgh, Detroit, Colorado, Atlanta and Baltimore. He is expected to be introduced to the dinner guests by Markou.

For more information on O’Riley, go to his website, www.christopheroriley.com.

To make reservations for Dinner at the Courthouse as well as the season opening concert, call 313-565-2424 or go to the Dearborn Symphony website, www.dearbornsymphony.org. The reservation deadline is Sept. 20.