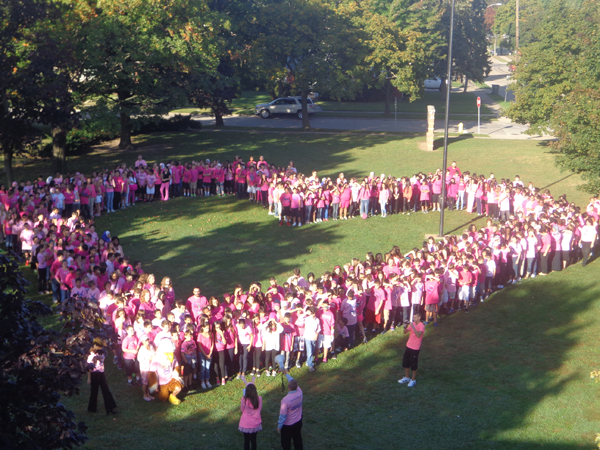 Photo by Bob Oliver
The student body at Bryant Middle School, approximately 800 students, line up in the shape of a heart on the front lawn of the school during the third annual anti-bullying celebration on Oct. 2. The event, which is unique to Bryant, is part of the Dearborn Public School’s “Response to Bullying Program.”

By BOB OLIVER
Times-Herald Newspapers
DEARBORN — The Dearborn Public Schools began the third year of its anti-bullying program by throwing a celebration highlighted by student performances and speeches by local community leaders at the Ford Community & Performing Arts Center Sept. 30.

The “Response to Bullying Program” was started in 2011 to identify, address and prevent bullying in the district’s schools. This year, the focus is on hurtful speech and the theme is “I was just kidding doesn’t count. If it hurts, it’s not funny!”

As part of the program, all staff having any contact with students are required to participate in annual anti-bullying professional development courses, schools hold three annual assemblies addressing bullying, and students are encouraged to report any bullying behavior they see or hear about.

DPS Supt. Brian Whiston said the goal of the program is to educate everyone on bullying and to eliminate it from the district and beyond.

Whiston added that he and the rest of the district held the event to “renew their commitment” to the program for the 2013-14 school year and into the future.

He also thanked the community for their support of the program since it was launched.

“Our community knows that bullying behavior can happen anywhere or anytime,” Whiston said. “This is the reason our board of education took on this project and why we have had such great support from our mayor, city council and community groups and organization.”

DPS School Board Treasurer James Schoolmaster told the audience that the board had a “zero tolerance” policy when it comes to bullying. He added that physical violence is not the only form of bullying students face.

“Much more subtle than physical bullying is psychological bullying,” Schoolmaster said. “This is gossiping, name-calling or leaving somebody out on purpose. This is harming to the students emotionally and is not acceptable.”

Mayor John O’Reilly Jr. was scheduled to make a speech at the event but was called out of town at the last minute. Dearborn Police Chief Ronald Haddad spoke in his place and told the audience that students cannot just stand by if they see bullying.

“You don’t have to take it,” Haddad said. “Stand up and tell somebody if you’re being bullied and if you’re watching someone else bully someone, you have to have the nerve to tell the bully that they can’t do that. You have to stand up and help your teammates and classmates out.”

Haddad also asked students to forgive their fellow students when the situation has been rectified.

“Don’t accept bullying,” Haddad said. “Don’t tolerate it, don’t condone it, but forgive and excuse those that make the mistake to employ bullying against you.”

Besides the comments from community leaders, entertainment was provided by DHS varsity and junior varsity cheerleaders and students from Bryant Middle School.

It also was announced at the event that the district will have a third competition for students to showcase their talents and promote the anti-bullying message. This year students are encouraged to make videos to tell viewers about their experiences being bullied, being a bully to another or being a bystander to a bullying situation.

DPS Communications Director David Mustonen said more details about the contest will be released shortly, but there will be five contest groups including grades K-2, 3-5, 6-8, 9-12 and for the first time a staff category for district employees.

In 2012, the student contest was for essay writing and the previous year it was a poster contest.